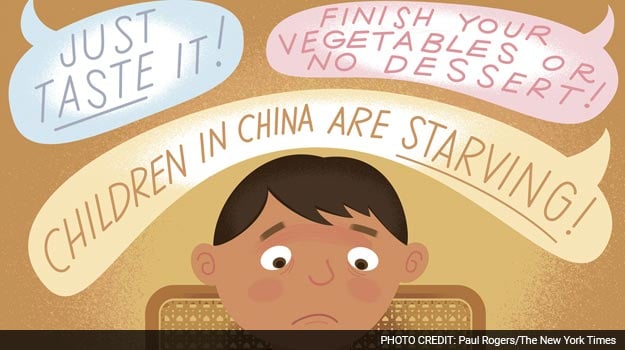 I was born a full-term, normal-size infant (7 1/2 pounds), but grew slowly, weighing only 27 pounds at age 3. Convinced that I had to eat better if I was to be a robust, healthy child, my parents boiled the meat I wouldn’t eat and gave me the juice to drink. For years, my anxious parents catered to my limited food tastes: Libby peas, not Del Monte; rib lamb chops, not shoulder; canned tomato sauce, not homemade; calf’s liver, not beef. My grandmother tried to fatten me up with snacks of Velveeta cheese and butter.

But the more I was wheedled, cajoled and even bribed to try the many wholesome foods I rejected outright, the less likely I was to succumb. Now, after reading an insightful book, “It’s Not About the Broccoli” by Dina Rose, I better understand that one source of my resistance was control. I was as determined to be in charge of what went into my mouth as my parents thought they should be.

Even today, in many households with young children, you’re likely to hear commands, bribes and pleas like “just taste it,” “finish your vegetables if you want dessert,” “clean your plate - the children in (name a country) are starving.” (My response to that one was: “So send it to them. I don’t want it!”)

Perhaps most damaging was the subliminal message my parents conveyed - a link between food and love that led to a 40-pound weight gain in my 20s when a big romance fizzled. Even now, you might think many U.S. children are in danger of becoming seriously undernourished. Millions of parents never leave home without a bag of snacks - candy, crackers or carrots, it really matters not. Children today are continually nibbling, whether in a stroller, car, train or plane. And food is a popular pacifier, with treats offered to relieve physical or emotional pain. Little wonder that many youngsters refuse to eat what’s served for dinner.Even the best of parental intentions too often program children’s taste buds at an early age to like foods that are not especially good for them. In counseling parents, Rose has found that those with a “nutrition mindset” pay undue attention to the nutrients in each meal rather than to their children’s overall eating pattern.

“The more parents focus on nutrition, the worse their kids tend to eat,” she said. Sweetened yogurt, which can contain as much sugar per ounce as soda, and mac 'n’ cheese, full of fat and salt, are featured because they contain calcium; chicken nuggets get a pass for their protein content, and french fries - well, they are vegetables.

The other side of the coin can be just as damaging. Given modern concerns about sugar and fat, some health-conscious parents forbid their children to indulge in treats, even at birthday parties. I know a neighborhood boy from such a restrictive household who used to keep a stash of the candy and cookies his parents forbade in a friend’s bedroom.

My own approach to feeding my children was limitation, not deprivation. I gave my young sons each two cookies and never brought the box to the table. They could use granola (sweet and fatty) as a garnish on their Wheaties or Cheerios. But a complaint that “Mike gets to eat Froot Loops,” was answered with “Go live with Mike if you want to,” which ended the discussion.

As Rose put it, “When systems don’t work, it’s usually because the parents are either overly controlling or overly permissive.” Her book has a telling subtitle: “Three Habits to Teach Your Kids for a Lifetime of Healthy Eating.” She has used her training as a sociologist and parent educator to develop a systematic approach to introducing children, even the pickiest among them, to foods that are good for them. At the same time, the tactics she suggests allow children to respond to their internal signals of hunger and fullness, rather than trying to “earn” dessert or please parents by taking a few more bites or cleaning their plates after they say they are full.

Though Rose calls her three critical habits “proportion, variety and moderation,” they are really about understanding and adapting to children’s natural aversion to strangeness and how tastes develop for foods initially disliked.

When asked to taste an unfamiliar food, she suggests giving children only a small taste - without expecting them to eat a full serving, even if they like it - and then asking them about its characteristics: what it feels like, tastes like or reminds them of. Tastings may have to be repeated many times to foster acceptance, even for adults. I “trained” myself to like cilantro, which tasted to me like kosher soap, by trying it over and over again because I couldn’t escape it when I ate out. I’m now working on goat cheese, which reminds me of wild boar.

“You can’t make kids eat, but you can influence their decision-making,” Rose said in an interview. She advocates a gradual introduction to variety in both the kinds of foods children are served and the way in which they are prepared. She suggests starting with a “rotation” of foods a child already likes, as long as the same food in the same form is not eaten two days in a row.

The way a food is prepared may prompt a switch from revulsion to acceptance. One child who wouldn’t touch steamed spinach asked for more when it was sautéed with garlic and olive oil. “Flavor is important,” Rose said.

Listen to the latest songs, only on JioSaavn.com
Having recently told a friend that I didn’t care for cauliflower, she replied, “Have you tried it roasted?” Well, now I have and now I love it, roasted with chopped garlic, a bit of lemon juice and drizzle of olive oil, then garnished after roasting with grated Parmesan. My twin grandsons, whose vegetable acceptance was long limited to broccoli and green beans, now eat baby carrots roasted with garlic and olive oil, and steamed asparagus pieces mixed with seasoned grains.

Portion size matters a lot, especially when introducing a new food, Rose said. Children are often intimidated by too much food on a plate, even if it is a food they like. Do your children clamor for desserts of questionable nutritional value? I recently hosted two families whose young children adored the frozen Greek yogurt desserts sold on the corner. I served a fat-free dessert with no dairy or added sweetener: frozen bananas, strawberries, mangoes and pineapple puréed through a $40 gadget called Yonanas. The kids asked for more . and more . and more. One mother bought the device the next day.