Avoid Fried Food to Ward Off Diabetes During Pregnancy 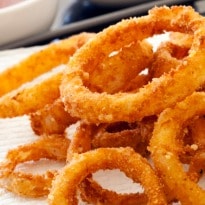 Gestational diabetes is a condition where pregnant women develop insulin resistance which results in high blood glucose. During pregnancy a woman's body experiences an increased production of certain hormones that may hamper insulin's ability to manage blood sugar levels. There are a number of factors that contribute to the development of gestational diabetes, obesity and genetics being a couple of them.

According to a recent study published in the journal Diabetologia, women who eat fried food regularly before conceiving can be at an increased risk of developing gestational diabetes. Women who have gestational diabetes are more likely to develop type 2 diabetes later in life.

There was a significant association of GDM with fried food consumption away from home, as deterioration of oils during frying is more profound when the oils are reused -- a practice more common away from home than at home. This may partly explain why we observed a stronger association of GDM risk with fried foods consumed away from home than fried foods consumed at home, concluded the authors.
Listen to the latest songs, only on JioSaavn.com
Diabetic conditions were detected in almost 800 pregnancies. It was found that an increased consumption of fried food before pregnancy contributed significantly in the development of gestational diabetes. According to the study, those who consumed fried food about three times a week were 13% more prone to developing gestational diabetes. Women who consumed fried food as frequent as four to six times a week were 31% more susceptible to becoming diabetic during pregnancy as compared to others.