Can Mouth Bacteria Help Predict the Onset of Diseases? 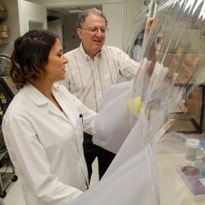 A new study led by Marvin Whiteley, Professor of molecular biosciences and director of the Center for Infectious Disease at The University of Texas at Austin, attempts to unravel the role of mouth bacteria in diseases like periodontitis and diabetes.

The study, which was published in the journal mBio, explained how the bacteria present in your mouth acts according your body's health. The entire bacterial community inside the mouth changes itself as well as its diet as a person turns unwell or becomes healthy again.

Marvin Whiteley explains the varied changes that these bacteria go through with the change is body's health. "The main thing that they change when they go from health to disease is that they change their metabolism," he confirmed.

The researchers used supercomputers at the Texas Advanced Computing Center (TACC) to carry out an extensive research on 60 different species of bacteria to represent the total community. More than 160,000 genes were analysed, yielding 28 to 85 million reads of RNA snippets, including about 17 million mRNA reads for each sample. The RNA sample acts like a memory image or 'core dump' to reveal the processes of the as-yet unknown bacterium it came from.

"RNA, for those who know about computers, is kind of like the RAM (random access memory), the working memory of the cell," study co-author Keith Turner, a postdoctoral researcher in Whiteley's lab, explained.

Listen to the latest songs, only on JioSaavn.com
"The thing that we found in this paper," said Whiteley, "is that this sharing, and how they interact with each other, changes quite drastically in disease than it does in health." So, a species of bacteria that ate fructose can switch to a different kind of sugar to feed on if one is ill. Different species of bacteria are constantly in tandem with each other, they share nutrients and at times feed on other species as they interact. At present, the experts are trying to speculate whether or not an upcoming health risk can be predicted by monitoring the change in the bacterial community, or if manipulation with the bacterial community is possible to shift them back from the diseased to healthy state.