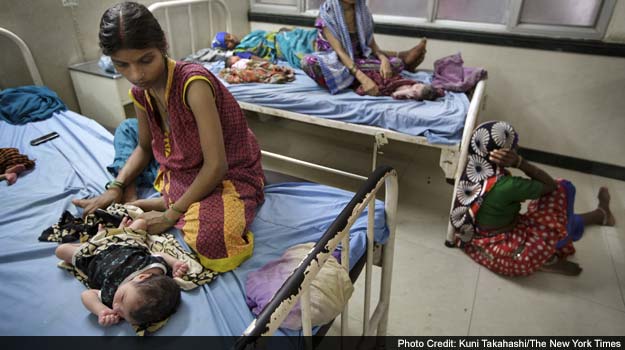 Her first child survived eight months before succumbing to pneumonia; her second was stillborn; her third, delivered in a rickshaw, gasped for an hour before dying.

When she got pregnant for a fourth time, Juhi, a woman from a South Delhi slum who uses only one name, was spotted by a local health worker and taken to a mobile clinic. A doctor diagnosed severe anemia, gave her iron pills and begged her to eat more.

Juhi listened, and gave birth to a boy, Muhammad Sultan, who has survived his first birthday - a huge milestone in a country with about one-sixth of the world's population but one-third of all newborn deaths.

"My in-laws were telling me they would get my husband married to someone else, because I couldn't have a healthy baby," Juhi, 26, said in an interview. "That's why we left our village. But now my mother-in-law is happy with me.

The poor health of children in India, even after decades of robust economic growth, is one of the world's most perplexing public health questions.

A child raised in India is far more likely to be malnourished than one from the Democratic Republic of Congo, Zimbabwe or Somalia, the world's poorest countries. Poor sanitation and a growing tide of drug-resistant infections also affect nutrition.

But an important factor is the relatively poor health of young Indian women. More than 90 percent of adolescent Indian girls are anemic, a crucial measure of poor nutrition. And while researchers have long known that Indian mothers tend to be less healthy than their African counterparts, a new study published Monday in the Proceedings of the National Academy of Sciences demonstrates that the disparity is far worse than previously believed.

By analyzing census data, Diane Coffey of Princeton University found that 42 percent of Indian mothers are underweight. The figure for sub-Saharan Africa is 16.5 percent.

Research has shown that genetics play no role in the size differences, leaving environmental factors as the only explanation, Coffey said.

The reasons for Indian mothers' relatively poor health are many, including a culture that discriminates against them. Sex differences in education, employment outside the home, and infant mortality are all greater in India than in Africa.

"In India, young newly married women are at the bottom of household hierarchies," Coffey said. "So at the same time that Indian women become pregnant, they are often expected to keep quiet, work hard and eat little."

Mothers also suffer from the same sewage-borne infections that so often kill their babies, made endemic by the primitive sanitation in much of the country, Coffey said.

"It is likely that infectious disease is responsible for a signification portion of India's pre-pregnancy underweight problem," she said.

Dr. Shella Duggal, Juhi's doctor at the mobile clinic, said that almost every pregnant woman she treats in her visits to Delhi's slums is severely anemic. Parasites, spread by poor sanitation and dirty water, are a crucial reason, she said.

"So the first thing we do is deworm them and give them iron supplements," Duggal said. "And then I tell them to eat."

It is a prescription many of her patients find difficult to carry out, she said.

"These mothers are the last persons in their families to have food," Duggal said. "First, she feeds the husband and then the kids, and only then will she eat the leftovers."

Juhi said she was trying to eat better.

"I would like to have one more child," she said, with a mixture of sadness and hope.