Drinking from Cans Could Shoot Up Your Blood Pressure 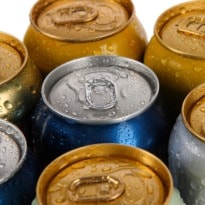 'Can' your favourite drink cause you harm? Yes, especially if it comes from a can. A new study in the journal 'Hypertension' says plastic bottles and cans are generally lined with a chemical called Bisphenol A (BPA), the consumption of which has been associated with high blood pressure. Previous studies have linked BPA to heart problems, cancer and developmental problems in children, amongst other things.

"I suggest consumers try to eat fresh foods rather than buying canned foods and buy drinks that are packaged in a glass bottles. Hopefully, manufacturers will develop and use healthy alternatives to BPA for the inner lining of can containers," said study author Yun-Chul Hong from Seoul National University College of Medicine in South Korea.

In this study, researchers conducted a trial on 60 adults, mostly Korean women, over the age of 60 from a local community centre. Each trial member visited the study site three times and was randomly provided with soy milk in either glass bottles or cans. Later urine was collected and tested for BPA concentration, blood pressure and heart rate variability two hours after consumption of each beverage.

Urinary BPA concentration increased by up to 1,600 percent after consuming canned beverages compared to after consuming the glass-bottled beverages. "A 5 mm Hg (millimetre of mercury) increase in systolic blood pressure by drinking two canned beverages may cause clinically significant problems, particularly in patients with heart disease or hypertension," Hong said. "A 20 mm Hg increase in systolic blood pressure doubles the risk of cardiovascular disease," he added.BPA has been in use since the 1960s and is used to make several everyday products like plastic bottles, dental fillings, cash register receipts, contact lenses and even baby bottles. In  2010, Canadian regulators banned BPA from all children's products and labelled it a toxic substance. In 2012, the Food and Drug Administration said BPA should not be used in children's drinking cups and baby bottles.

Owing to the growing awareness and concerns around BPA, many packaged food products and drinks now carry 'BPA-free' labels. Unfortunately, according to a study in the journal Environmental Health Perspectives, these products aren't any better. They are often lined with chemically similar alternatives like Bisphenol S, and some of these alternatives can be even more potent than BPA.

Listen to the latest songs, only on JioSaavn.com
On the other side, not everyone is convinced about the hoopla around BPA. The American Chemistry Council, an industry trade group, has said BPA is safe. Many researchers and doctors choose to disagree.