Eating These May Improve Autism Symptoms 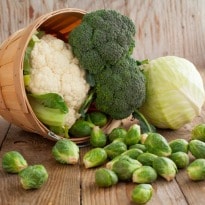 Autism is neurological disorder that affects the growth and development of the brain and the central nervous system. The symptoms become apparent before a child is three years old. It may affects a person's verbal communication, social interaction and may lead to restrictive and compulsive behaviour. It has been long believed that the main cause of autism lies in genetics. There is no sure-shot cure for the disease but health experts and scientists have come up with various interventions that can help in managing and controlling the symptoms.

A latest study led by an Indian-origin researcher has some good news to share. Researchers at MassGeneral Hospital for Children (MGHfC) and Johns Hopkins University School of Medicine have found a chemical in broccoli sprouts that may improve some social and behavioural problems that affect people with autism. The study that appears in the journal PNAS, describes how participants receiving a daily dose of sulforaphane - a compound found in foods such as broccoli, cauliflower and cabbage - showed improvement in both behavioural and communication assessments in as less as four weeks.

The study involved 44 young men, aged 13 to 27, who had been diagnosed with moderate to severe autism spectrum disorder. Participants were randomly assigned to a daily dose of either sulforaphane - extracted from broccoli sprouts - or a placebo, with neither investigators, participants nor their caregivers knowing who was receiving the study drug. This treatment was discontinued after 18 weeks, and additional assessments of 22 participants were conducted 4 weeks later.According to lead author Kanwaljit Singh, from MGHfC-affiliated Lurie Centre for Autism and UMass, "Among the 40 participants who returned for at least one evaluation, the average scores for each of the assessments were significantly better for the 26 participants receiving sulforaphane than for the 14 who received a placebo"

Even at the 4-week visit, some caregivers reported a noticeable behavioural improvement, and by the end of the study period, both study staff and family members correctly guessed the assignments of many participants. Overall, 17 of the 26 participants who received sulforaphane were judged by their caregivers to have improvements in behaviour, social interaction and calmness while on active treatment.

After 18 weeks of treatment, the average scores on two assessments of those who received sulforaphane had decreased 34 and 17 per cent, respectively - indicating improvement in
factors such as irritability, lethargy, repetitive movements, hyperactivity, communication, motivation and mannerisms.

Assessments using the Clinical Global Impression scale indicated that 46 per cent of sulforaphane recipients showed a noticeable improvement in social interaction, 54 per
cent in aberrant behaviours, and 42 per cent in verbal communication.

Listen to the latest songs, only on JioSaavn.com
Most but not all of the improvements had disappeared by the 22-week reassessment, supporting the probability that changes had been the result of sulforaphane treatment.

In conclusion, the authors stress on the fact that the results of this pilot study must be confirmed in larger investigations to understand more about sulforaphane's therapeutic
benefit for treating autism.