Eating These May Prevent Growth of Prostate Cancer 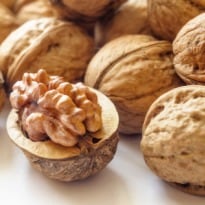 Hailed as one of the world's most loved superfoods, walnuts are a packed with omega-3 fatty acids. We've known them for promoting brain and heart health and now a latest research adds to its list of health benefits.

The study published in the Journal of Medicinal Food states that walnuts can help in slowing down the growth of prostate cancer. A team of researchers at the University of California conducted experiments on mice module and found that walnuts assisted in slowing down the growth of cancer. However, the team is still considering further study to ensure that similar results can be achieved when tested on humans.

"Walnuts are a perfect example. While they are high in fat, their fat does not drive prostate cancer growth. In fact, walnuts do just the opposite when fed to mice," said lead scientist and research nutritionist Paul Davis.

Their experiments show that both walnut and walnut oil reduced cholesterol and increased insulin sensitivity in mice. The walnut diet also reduced levels of the hormone IGF-1, which had been previously implicated in both prostate and breast cancer.

For the study, mice were fed whole walnuts, walnut oil or the walnut-like fat for 18 weeks. It was found that other nut components apart from the omega-3s helped in achieving an improved state in mice. While the walnuts and walnut oil reduced cholesterol and slowed prostate cancer growth, the walnut-like fat did not have these same effects.Moreover, there was an increase in both adiponectin and the tumour suppressor PSP94, as well as reduced levels of COX-2. These are all markers for reduced prostate cancer risk. Though, the study does not pinpoint which combination of compounds in walnuts slows cancer growth, it did rule out fibre, zinc, magnesium and selenium.

"We showed that it's not the omega-3s by themselves, but it can be a combination of the omega 3s with whatever else is in the walnut oil. It's becoming increasingly clear in nutrition that it's never going to be just one thing; it's always a combination," concludes Davis.