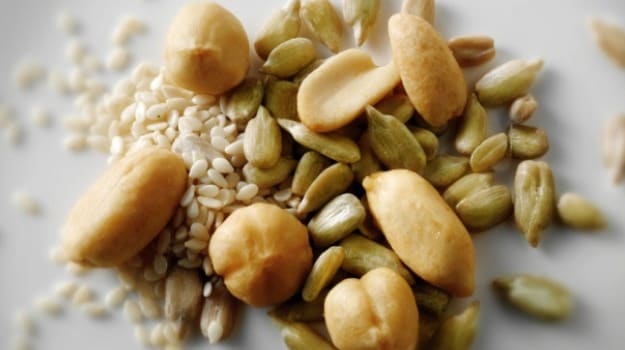 Researchers say children should be introduced to peanuts as soon as they begin eating solid foods, contradicting previous advice.

Babies as young as four months old should be given peanut butter or peanut snacks, scientists have said after a study predicted that the growing tide of peanut allergies can be reversed.

About one in 50 schoolchildren in the UK have a peanut allergy. The number of those allergic in the UK and North America has more than doubled in the last 10 years, and cases have emerged in Africa and Asia. In severe cases the allergy can lead to anaphylaxis, which can be fatal.

For years, paediatricians and allergy specialists advised that peanuts should be avoided in the early years of a child's life. But the researchers say new public health guidelines are needed.

A study carried out by King's College London and published in the New England Journal of Medicine shows that the number of children developing a peanut allergy can be drastically reduced if children are introduced to peanuts as soon as they begin to eat solid foods.

The Leap (Learning Early About Peanut Allergy) study enrolled 640 children aged 4-11 months from Evelina London children's hospital who were considered at high risk of developing a peanut allergy because they had severe eczema and/or were allergic to eggs.

Until the age of five, half the children were given foods containing peanuts three times a week, while the families of the rest avoided giving their child peanuts.

By the time they were five, under 1% of the children who had regularly eaten peanuts throughout the study were allergic to them, compared with 17.5% of the rest.

Prof Gideon Lack, lead author of the study, said avoidance of peanuts had in part caused the rise in allergies.

"It is fair to say that in part the rise in peanut allergy can be explained by the fact that we have become peanut-avoidant as far as babies and young children are concerned," he told the Guardian.

"One reason was a growing perception from the 1970s/1980s that eating whole peanuts could cause choking and be inhaled into the lung.

"The other driving factor was the perception that we have a lot of peanuts in our society, as do the Americans, and peanut allergy was going up, so it was assumed that one was the cause of the other.

"The American health guidelines came out around 2000, as did the UK guidelines, urging that we avoid giving peanuts to high-risk families."

But Lack stressed that it should be done safely. Babies cannot be given whole peanuts, but they can have smooth peanut butter or peanut snacks that will not cause any choking.

Some babies - like those in the trial - will be at higher risk of peanut allergy because they have other food allergies or eczema.

Lack said it was believed to be possible for some babies to become allergic to peanuts even before they are old enough to eat them, because peanut molecules in the environment - perhaps on the hands of an adult who has eaten a peanut butter sandwich - can enter through broken skin caused by eczema.

But he said it was important to get most babies eating some form of peanut snack or food as early in their life as possible. "We believe the window of opportunity to intervene is a very narrow one," Lack said.

The researchers are now embarking on a further study to see whether there are other allergies caused by avoidance of certain foods.

The Eat study (Early Acquisition of Tolerance) at St Thomas' hospital in London aims to prevent children from becoming allergic to eggs, milk, sesame and fish as well as peanuts.