Fight Infections and Boost Your Immunity with Turmeric 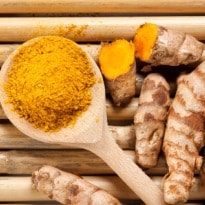 Immunity is your body's natural defense against disease causing bacteria and virus. It can considerably reduce the odds of you getting sick. Nutritionists and health experts have often pointed out how important it is to have good immunity. It's the holy grail of health - It can fight cold, cough and chest congestion, and also helps keep you away from bigger, more serious diseases and ailments.

A healthy diet, adequate sleep and exercise are all factors that strengthen your immune system but there is something else you can do to prevent your immunity dropping below the recommended levels and giving it a boost. And it's sitting comfortably in your spice cabinet - Turmeric, a yellow coloured and warm spice that comes from the root of the Curcuma plant.

According to a research published in the journal PLOS ONE (Public Library of Science), curcumin, a compound found in turmeric is known to have anti-inflammatory properties that helps boost immunity. While eating turmeric in its raw form is good, researchers explain how the body might not be absorbing the curcumin effectively.

Most curcumin in food or supplements stays in the gastrointestinal tract, and any portion that's absorbed is metabolised quickly. Nicholas Young, a postdoctoral researcher in rheumatology and immunology at Ohio State and lead author of the study set out to investigate whether enabling widespread availability of curcumin's biological effects to the entire body could make it useful both therapeutically and as a daily supplement to combat disease.According to Nicholas, "This study suggests that we have identified a better and more effective way to deliver curcumin and know what diseases to use it for so that we can take advantage of its anti-inflammatory power." In the study, curcumin powder was mixed with castor oil and polyethylene glycol in a process called nano-emulsion, creating fluid teeming with microvesicles that contain curcumin. This process allows the compound to dissolve and be more easily absorbed by the gut to enter the bloodstream and tissues.

Researchers tested their theory on mice and found that curcumin stops recruitment of specific immune cells that, when overactive, are linked to such problems as heart disease and obesity. The study also found that nano-emulsified curcumin halted the recruitment of immune cells called macrophages that "eat" invading pathogens but also contribute to inflammation by
secreting pro-inflammatory chemicals.

Listen to the latest songs, only on JioSaavn.com
Researchers found that in cells isolated from human blood samples, macrophages were stopped in their tracks. According to Young, "This macrophage-specific effect of curcumin had not been described before. Because of that finding, we propose nano-emulsified curcumin has the best potential against macrophage-associated inflammation."