How to Make Exercise a Habit 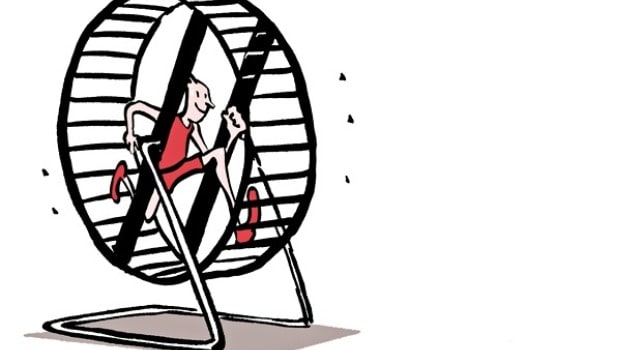 Have your New Year resolutions gone to pot (belly) already? Here's a few tips to get yourself back on track

Be armed and ready

Forming a habit doesn't come without a bit of effort early on. Sport and exercise psychologist Helen O'Connor recommends arming yourself with what she calls an "if and then plan" to help combat potential obstacles. This technique links a specific cue (if) with a specific response to that cue (then). "For example," she says, "if you want to play badminton every Thursday but your colleagues often tempt you out for a drink, be prepared and say to yourself beforehand, 'if I get invited out for a drink I'm going to decline by remembering how good I'll feel after badminton'."

You also need to develop smaller habits around the bigger one, such as booking a court in advance, taking your kit to work and making sure you've had enough to eat beforehand.

Start as you mean to go on

If your ultimate goal is to exercise, say, three times a week, start out by doing that rather than building up to it. "Research shows that frequent, early repetitions of certain behaviours, such as exercise, make it more likely to become something you do automatically," says Helen.

This doesn't mean you have to go all out in each session though. A classic mistake, especially in tough sports such as running, is starting off too hard. Your good intentions will melt away if you get back from a run feeling sick and exhausted. Begin slowly and comfortably. With running, for example, go out for 20 minutes, walking for a minute and running for a minute.

You'll get back feeling exercised and chuffed, instead of defeated. Gradually reduce the walking (say, run for a minute, walk for 30 seconds). Within weeks, you'll be able to run for 20 minutes non-stop.

If you exercise regularly, you will lose weight but don't make it your sole marker of success. As you get fitter, you'll gain muscle and become more toned - muscle weighs more than fat, so that will slow weight loss. "Measuring other factors, such as how fast you can run a kilometre or how long it takes you to swim 500m, is a great motivator and shows you that you're getting fitter and healthier, as well as slimmer," says Helen. Focus on the mental health benefits too - feeling less anxious, stressed or angry will keep you coming back for more.

Exercise is not all about the gym. "You're unlikely to make exercise a habit if you choose something that doesn't suit your personality," says Helen. For example, if the idea of exercise for exercise's sake doesn't appeal to you, then give it a function. Cycle to work or run halfway there. At weekends, walk to meet friends when you would have taken the car or public transport.

Equally, if you thrive on competition, choose a team sport. If you like solitude or need headspace, plug in some headphones and go for a run. "And remember," says Helen, "while you need to enjoy exercise, you also need to have a realistic view of it - breathlessness, sweat and a bit of muscle soreness are all part of getting fitter."

Life will sometimes get in the way of exercise. Illness, work, holidays - all are lying in wait to scupper your plans and then it's easy to just give up. "The key is to make a small token effort to make up for missed sessions," says Helen.

If, say, you miss a gym session because you had to work late, do 10 minutes of resistance exercises in the living room when you get home. Or take the dog for an extra long walk the following day. "It's about not feeling like you're back at square one and trying to maintain the new habit rather than losing it," says Helen. "The same goes for holidays. Yes, you'll probably drink and eat more, but resolve to mitigate this a little by going for evening walks or doing a few laps in the pool."

A study from 2009 showed that it takes, on average, 66 repetitions for a new healthy behaviour - from eating an apple to going for a run - to become a habit, so it's not going to happen overnight. But persevering in any small way you can should get you there in the end.

'You're unlikely to make exercise a habit if you choose something that doesn't suit you.' Photograph: Nishant Choksi