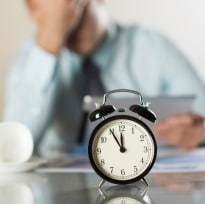 Long working hours have recently been on the radar of health experts and researchers. Previously, it has been linked to increased smoking and coronary heart disease. (More: Long Working Hours Linked to Increased Smoking)

A new study conducted by a team at University College London has found that long working hours can also make a person susceptible to diabetes. The study was published in The Lancet Diabetes & Endocrinology and explains that those who work for 55 hours or more in a week are 30 per cent more likely to develop Type 2 diabetes than those who work for 35 to 40 hours weekly. Ideally, one should not be working in more than 40 hours a week. Mika Kivimaki, Professor of Epidemiology at University College London, UK, and colleagues conducted a systematic review and meta-analysis of published studies and unpublished individual-level data examining the effects of long working hours on type 2 diabetes. (More: Why Working Long Hours is Bad for You)

"The pooling of all available studies on this topic allowed us to investigate the association between working hours and diabetes risk with greater precision than has been previously possible," said Kivimaki.

"Although working long hours is unlikely to increase diabetes risk in everyone, health professionals should be aware that it is associated with a significantly increased risk in people doing low socioeconomic status jobs," Kivimaki said.

To arrive at the conclusion, the team closely examined accumulated data from four pre-published studies and 19 studies with unpublished data involving 22,2,120 men and women from the US, Europe, Japan, and Australia who were followed for an average of 7.6 years. It was noted that individuals doing low on the socioeconomic status, who also worked 55 hours or more per week had a roughly 30 per cent increased risk of developing diabetes compared to their counterparts who worked between 35 and 40 hours a week, even after taking into account health behaviours such as smoking and physical activity and other risk factors like age, sex, and obesity.

Promoted
Listen to the latest songs, only on JioSaavn.com
The experts concluded that long working hours when coupled with low socioeconomic status may put working professional at the risk of developing  type 2 diabetes. The study also revealed that this association remained strong even after excluding shift work, which has been shown to increase the risk of obesity and type 2 diabetes. The team suggested a number of possible explanations especially disruptive schedules that leave little time to take part in health restoring activities like as sleeping, unwinding, and exercise.