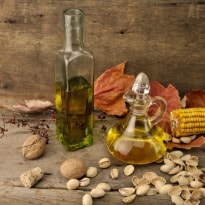 A diet rich in olive oil, nuts and other Mediterranean foods reduces the risk of heart attack, stroke or death from heart disease by up to 30 percent, according to a study published in the New England Journal of Medicine.

"We observed that an energy-unrestricted Mediterranean diet, supplemented with extra-virgin olive oil or nuts, resulted in a substantial reduction in the risk of major cardiovascular events among high-risk persons," the study stated.

Rachel Johnson, a professor of nutrition at the University of Vermont and a spokeswoman for the American Heart Association, described the findings of the study as "really impressive".

"They looked at heart attacks and strokes and death. At the end of the day, that is what really matters," Johnson told The New York Times.

The Mediterranean diet includes olive oil, fruits, nuts, vegetables, fish and poultry, along with at least one glass of wine with daily meals, and reduced amounts of dairy products, red meat and sweets.

Researchers have long observed that people from Mediterranean countries tend to have lower levels of heart disease, but it was not clear if that was hereditary, linked to lifestyle or due to the difference in diet.

The study published Monday was conducted through the University of Barcelona, and involved roughly 7,500 patients at risk for heart disease but without any symptoms of it when the study began.

Some were assigned to the Mediterranean diet, and others were counselled to follow a low-fat diet.

Promoted
Listen to the latest songs, only on JioSaavn.com
The study found those on the low-fat diet struggled to be compliant, and did not reduce their fat intake by a notable amount.

Researchers found those assigned to follow the Mediterranean diet stuck to their eating plan and saw an overall 30 percent drop in risk of heart attacks, strokes and death from heart disease.

Comments The results were much bigger than researchers expected, and enough to convince many of them to change their own diets, said Ramon Estruch, who led the study