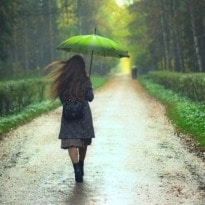 Monsoon showers do come as a relief but also bring with them health irritants like allergies, infections and indigestion. There's no need to panic, say experts, who suggest small variations in eating habits to keep problems at bay.The increased humidity in atmosphere takes a toll on the body's digestion. Some dietary changes can help sort this out.

"Humidity levels are high during the monsoon because of which the capability of the body to digest is at its lowest. Digestion is generally weak. Therefore, avoid heavy and oily food during the monsoon season as it can lead to an upset stomach," Samaddar told IANS.

Experts say besides avoiding oily food, one should also keep away from street food.

Greater intake of green leafy vegetables builds immunity and is light on the stomach. But most vegetables and fruits also carry the risk of infection and, therefore, should be washed properly before use.

Fruits are the ideal food as they restore energy. But avoid watermelons and muskmelons and opt for mangoes, apples, pomegranates and pears, among others, experts say.

But excess of anything is harmful. Gorging too much on mangoes can lead to pimples, says nutritionist Rashmi Channana.

Foods such as barley, brown rice and oats are the stomach's best friend during the monsoon season.

If a dash of garlic is added to soups, stir fries and curries, it also helps building the body's immunity.

The intake of dairy products should not be high as they have maximum propensity to get infected by germs.

Milk, said to be a complete diet, is not advised during the monsoon season. Instead one can go for curd, says Nidhi Yadav, head (Clinical Nutrition), Fortis Healthcare.

"One should have yogurt instead of milk and should add almonds to the diet. Also drink boiled and purified water during these days," she added.

The damp and humid weather leads to fungal and bacterial infection too. Medical practitioner Veena Sehgal warns against ignoring it as that could be an indication of dengue.

"People who face skin allergies during monsoon should not eat spicy food because spicy food stimulates the circulation and raises body temperature, which leads to skin irritation, allergies and diseases. If the problem persists, one should immediately go for a blood test," said Sehgal.

Promoted
Listen to the latest songs, only on JioSaavn.com
A lot of skin problems erupt due to humidity. The skin gets oily and is prone to bacterial infections. Other problems such as pyodera, boils, change in skin color dullness, rashes and patchy skin also arise.

Comments "Use anti-bacterial soaps and face wash and talcum to keep your skin dry," he adds.