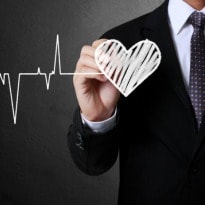 With an ever-increasing number of Indians suffering from heart diseases, a drastic change in lifestyle and eating habits is the need of the hour to tackle the alarming situation with a special focus on youth, say doctors.

Cardiovascular diseases would be the largest cause of death and disability in India by 2020 as per a World Health Organisation (WHO) report.

"The average age of people with heart ailments is coming down. We are getting patients as young as 20 years," Neeraj Bhalla, senior consultant and director of the heart centre at BLK Super Specialty Hospital, told IANS ahead of World Heart Day that is observed Sep 29.

"In the next five to 10 years around 20 percent of the Indian population would be affected," he added.

Atul Mathur, director of Invasive Cardiology at Fortis Escorts Heart institute, said that patients under the age of 40 have increased from 10 percent a decade ago to 30 percent today.

"This is a perturbing development... A drastic change in lifestyle and food habits is needed," Mathur told IANS.

According to doctors, many of the young professionals today have odd working hours that leads to stress, and not many of them have the privilege of savouring home cooked meals. On top of it, the indulgence in smoking and drinking to "reduce the stress" worsens the situation.

"Smoking, eating junk food and less physical exercise are the evils that are severely affecting our youth today. On top of it the pressure at work which in many cases leads to drinking and smoking also complicates the situation," Kamaldeep Singh, consultant cardiologist at Gurgaon-based Columbia Asia Hospital, told IANS.

According to Singh, the focus should be on how to educate youngsters to lead a healthy lifestyle.

The doctors said that efforts should be made to stop leading an unhealthy lifestyle which may lead to a cardiovascular disease later. The education and guidance should begin early.

Physical exercise, avoiding junk and oily food and not smoking are some of the steps that must be adopted by people, say the doctors.

"Stress is a part of life today and you can't avoid it, but half an hour of walk or exercise at home or office, five days a week can do wonders," Rishi Gupta, director, Cardiology, Asian Institute of Medical Sciences, told IANS.

World Heart Day was created in 2000 to inform people around the globe that heart disease and stroke are the world's leading cause of death, claiming 17.3 million lives each year and the numbers are rising.

By 2030, it is expected that 23 million people will die from CVDs annually.

Comments Together with its members, the World Heart Federation spreads the news that at least 80 percent of premature deaths from heart disease and stroke could be avoided if the main risk factors, tobacco, unhealthy diet and physical inactivity, are controlled.