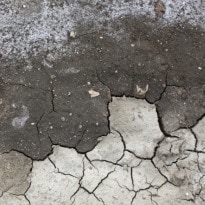 According to a new United Nations study, salt-induced land degradation has been on the rise. Salt-degradation is common in arid and semi-arid areas that receive less rainfall because of which there isn't enough water seeping through the soil. It is also seen in areas where irrigation is practiced without a natural or artificial drainage system.

The research was conducted by the Institute for Water, Environment and Health during which it was found that for more than 20 years now, every day an average of 2, 000 hectares of land is getting degraded by salt. The degraded land includes arid and semi-arid areas across 75 countries including, Aral Sea Basin in Central Asia, Indo-Gangetic Basin, Indus Basin of Pakistan, Chinese Yellow River Basin, Euphrates Basin, Australian Murray-Darling Basin and San Joaquin Valley in the United States. The total of global irrigated land covers some 310 million hectares and according to this research, salt-spoiled soil measures up to 20% of the total irrigated land.The total of this area would be equal to the entire country of France.

Scientists are of the opinion that this soil-induced degradation amounts to a significant loss in crop yield which contributes to the global economic loss.The inflation-adjusted cost of salt-induced land degradation in 2013 was estimated at US$441 per hectare, yielding an estimate of global economic losses at US$27.3 billion per year. Not only this, the adverse effects in the Indo-Gangetic plain alone would include loss in employment - almost 50-80 man-days per hectare - as well as nearly 50 percent increase in human (20-40%) and animal (15-50%) health problems. The study drew an estimated cost of crop losses across the world by reviewing more than 20 studies over past 20 years. The countries included in the review were Australia, India, Pakistan, Spain, Central Asia region and the US.

"It is important to note that the above numbers on global cost of salt-induced land degradation refer to economic losses based on crop yield losses only," according to the paper authored by eight experts based in Canada, Jordan, Pakistan and Sri Lanka.

"However, the crop yields from irrigated areas not affected by salinisation have increased since 1990 due to factors such as improved crop varieties, efficient on-farm practices, better fertiliser use, and efficient water management practices. Consequently, there may be larger gaps in crop yields harvested from salt-affected and non-affected areas under similar agro-ecosystems, suggesting an underestimation of the economic cost of salt-induced land degradation," the paper added.

In India, the affected area is the Indo-Gangetic Basin. The land degradation in the Indo-gangetic basin could result in crop yield losses for wheat, rice, sugarcane and cotton
up to 40 per cent, 45 percent, 48 per cent, and 63 per cent, respectively.

According to the team, reversing land degradation and reviving salt-affected areas back into a highly productive state is of the utmost importance to achieve favorable environmental benefits coupled with economic gains.