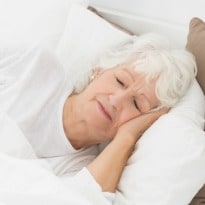 Seniors who slept too little or too much during midlife or after are at increased risk for memory problems, as are those whose sleep habits changed over time, a new study suggests.

Researchers looked at more than 15,000 women, 70 and older, who took part in a large study of health professionals. The women were depression- and stroke-free when they underwent their initial assessment.

Participants who slept five hours or less, or nine hours or more a day -- either in midlife or later life -- had worse memory than those who slept seven hours a day. The difference in memory was equivalent to nearly two extra years of age, the researchers said.

Women whose amount of sleep changed by more than two hours a night over time had poorer memory than those who had no sleep changes, according to the study published May 1 in the Journal of the American Geriatrics Society.

"Given the importance of preserving memory into later life, it is critical to identify modifiable factors, such as sleeping habits, that may help achieve this goal," study leader Elizabeth Devore, of Brigham and Women's Hospital in Boston, said in a hospital news release.

"Our findings suggest that getting an 'average' amount of sleep, seven hours per day, may help maintain memory in later life and that clinical interventions based on sleep therapy should be examined for the prevention of [mental] impairment," she added.

The study adds "to our knowledge about how sleep impacts memory. More research is needed to confirm these findings and explore possible mechanisms underlying these associations," Devore concluded.

While the study found an association between sleep time during midlife and older age and memory function in older women, it did not prove a cause-and-effect relationship.