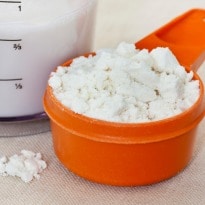 Diet plays a very important role in regulating blood sugar levels for diabetics. A new research insists on including more whey protein in your diet to keep the blood sugar levels in control. (More: Check diabetes with a nutrition therapy)

"What is remarkable is that consuming whey protein before meals reduces the blood sugar spikes seen after meals," said Daniela Jakubowicz, Professor at Tel Aviv University in Israel.

"It also improves the body's insulin response, putting it in the same range or even higher than that produced by novel anti-diabetic drugs," she added.

It suggests that consuming whey protein before a breakfast can help in reducing the blood sugar spikes which are usually experienced after meals. Whey is the watery portion of milk which is produced as a by-product while making cheese. It is mostly used as a food supplement by athletes, body builders or those who are lactose intolerant. It is a great source of protein and this new study credits it with improving the body's response to insulin. (More: Why you should eat more protein)

Promoted
Listen to the latest songs, only on JioSaavn.com
The study included 15 people with well-controlled type-2 diabetes who were not taking any medications except for sulfonylureas or metformin (oral diabetes drugs). The participants were tested 180 minutes after their meal and it was found that glucose levels reduced by 28 percent when whey protein was consumed. Also, the early insulin response (the first 30 minutes following breakfast) was 96 percent higher. (More: 8 protein-rich foods to gorge on)

High milk intake has long been associated with lower risk for type 2 diabetes and cardiovascular disease, and milk whey protein increases the production of a gut hormone called glucagon-like peptide-1 (GLP-1) that stimulates insulin secretion. This helps in reducing the blood glucose rise after a meal, Jakubowicz explained.

Comments"In summary, consumption of whey protein shortly before a high-glycaemic-index breakfast increased the early and late post-meal insulin secretion, improved GLP-1 responses and reduced post-meal blood sugar levels in type-2 diabetic patients," say researchers. The research was published in the journal Diabetologia, the journal of the European Association for the Study of Diabetes.