Why Eating With Other People Makes Us Fat 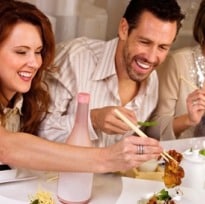 Studies suggest we eat more in the company of an overweight person, a man, a spouse, family members, friends ... Why is this, and is there anything we can do to control it?

Eating with other people is fattening. This has been demonstrated by umpteen scientists who have our collective waistlines at heart. Take the "fat suit study" (as it is informally known), just published in the latest issue of the journal Appetite. A team of psychologists, led by Mitsuru Shimizu at Southern Illinois University, found that people ate 31.6% more pasta and 43.5% less salad when in the company of an overweight person, irrespective of how healthy the overweight person's food servings were.

The experiment was following up on a hypothesis, explains Shimizu, that "the goal to eat healthily is deactivated by eating with someone who is overweight". "Probably," he continues, "we have an unconscious goal to eat healthily, because we are supposed to, but when eating with an overweight companion, maybe that goal is less activated or deactivated."

This raises many questions - not least, why in heavens did they hire an actor and a fat suit instead of using a real overweight person? But, most pressingly, what is the take-home lesson from these findings? It is, says Shimizu, a case of forewarned is forearmed. "These things are happening unconsciously, so if we know that there is an influence from an overweight person, then maybe we can avoid such an effect.

When we eat with other people, we consume on average 44% more food than we do when dining alone. In 1989, American psychologist John de Castro looked into how eating in different-sized groups would affect food intake. In a later review paper, he broke it down: "Meals eaten with one other person present were 33% larger than meals eaten alone, whereas 47%, 58%, 69%, 70%, 72%, and 96% increases were associated with two, three, four, five, six, and seven or more people present, respectively." It was thought that this had something to do with the fact that mealtimes are prolonged when eating in company. However, in 2010 a team at the University of Adelaide spied on lone diners at a fast-food restaurant and observed that people whose meals took longer because they were reading did not eat significantly more than anyone else, so there is more to it than time spent at the table. Animals eat more in company, too. From rats to chickens to puppies, if you feed them until they're full, then present them with another of their species eating, they will start eating all over again.

A later study by de Castro discovered that who we eat with also affects indulgence levels. Women ate 13% more when dining with a man (men's intake wasn't affected by the gender of their companion). And meals with spouses, family or friends are 22%, 23% and 14% larger, respectively, than meals eaten with other people. We eat more when we're in relaxed company, which figures. De Castro also found that we eat faster with our families and slower with friends.

It is so hard not to be affected by what others choose to eat. When ordering in restaurants, we may consciously try to order something that no one else has, both in the name of variety and as part of a psychological phenomenon known as the "need for uniqueness". Unconsciously, however, we're giant copycats. Facial expressions of others can affect food choice, as demonstrated in a French paper published in Appetite in 2009. When subjects were shown an image of someone exhibiting disgust while eating a food liked by the subjects, their desire to eat it decreased. And when they were shown an image of someone enjoying a food they disliked, their desire to eat it increased. Another experiment published in the Journal of Consumer Research found that, when presented with two types of crackers, people will be drawn to the same ones as a colleague they're talking to.

Finally, when offered palatable snacks in polite company, we tend to take our lead from others. Researchers at the University of Toronto deprived participants of food for 24 hours before presenting them with nibbles in a social setting. Despite being hungry like the wolf, if their companion ate very little, the subjects restrained themselves. But gosh, it's annoying when that happens. You want shovel in handfuls of crisps and then all the salt off your fingers so much that you can't concentrate on the conversation. Or perhaps that's just me. Do you notice your food choices being swayed by the company you keep?

We eat 47% more when eating with two other people. Photograph: Alamy