Why You Should Be Drinking Ajwain Water Every Day: 6 Hard-to-Beat Reasons. 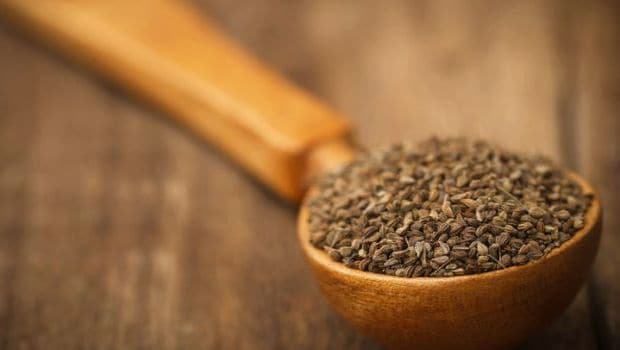 Highlights
Ajwain, Bishop's weed or carom seeds are some of the names with which the good old ajwain is known around the world. The 'seeds' we use mostly in Indian households are actually the fruits of this herb. Ajwain is said to be a native of the Asian continent and continues to be cultivated extensively in our country, especially in Rajasthan. Whether it is pooris, kachoris, rasam or kadhi, the flavour of ajwain is unmistakable and can be found across so many Indian regional dishes. Another reason for its extensive use is perhaps the many health benefits it offers; from aiding digestion to relieving tooth and ear related pain.

While adding ajwain to our daily food is one way of consuming this wonder spice, having it infused in water daily can be a more potent way of targeting a health problem.

Ajwain contains thymol, an essential oil that gives the spice its distinct taste and aroma. Another spice that contains thymol is thyme, and this is probably why both ajwain and thyme have similar aromas. Most of ajwain's health benefits can be attributed to the presence of thymol.

In Ayurveda too, ajwain is a spice recommended for its many beneficial properties. In fact, according to The Complete Book of Ayurvedic Home Remedies by Vasant Lad, people with a Vata disposition are recommended to eat ajwain, both as a spice as well as herbal tea. People with Kapha disposition can include ajwain in their diets, whereas Pita people should avoid ajwain both as a spice as well as in tea. Owning to its therapeutic properties, ajwain also makes its way inside 'potlis' or poltices for Ayurvedic massages too.

How to Make Ajwain Water

Almost all herbs when eaten for their health benefits, and not being consumed for their flavour alone, need a 'medium' for better absorption. The medium could vary from ghee to milk, honey and water. Ajwain water (water infused with this spice) is very easy to make and is a great way to receive the benefits of Ajwain. Just soak 2tsp of dry roasted Ajwain seeds in a cup of water overnight. You could boil this water, strain, wait for it to cool down and then have it, or simply mix the water well next morning, strain the water and have it on an empty stomach.

Here are the top 5 benefits of drinking Ajwain Water

1. For its Carminative Properties

If you suffer from chronic flatulence, then drinking Ajwain water regularly can help with the condition. The causes of flatulence could vary from dietary choices or a sedantry lifestyle, either way drinking ajwain-infused water is a great home remedy for relieving flatulence.3.

One sure shot way to lose weight in a healthy way is to make sure the digestive system works well. When food gets digested and eliminated properly, the chances of unwarranted weight gain are lower. Thanks to its digestive properties, ajwain water can be a helpful companion on your weight loss journey.

Ajwain is known to be an effective digestive-aid. No surprises then that ajwain is used in almost all fried or heavy stuff we usually consume; from pakoras to paranthas. Thymol present in Ajwain seeds, helps release gastric juices in the stomach thereby accelerating the process of digestion.

However, in the case of a chronic gastric symptoms, it is advisable to consult your doctor and go through a complete check-up to rule out major ailments.

Including Ajwain in their diet is recommended to many pregnant women in India. Pregnancy often brings with it many gastric issues like constipation and bloating. Drinking on ajwain water is known to help these symptoms. Many women are suggested to have ajwain water post their delivery to help with digestion, lactation and clearing the uterus too. Note: There isn't enough scientific evidence around this, and this must be followed only after a green signal by your doctor.

Simply put, acidity is described as a condition when there is excess production of acids by gastric glands. This causing a burning sensation in your stomach and sometimes even in your throat. Causes of acidity can range from stress to irregular meal timings and eating food that is over-spicy. You would have often seen people chewing on a mix of fennel and ajwain seeds post a heavy meal. Sipping on ajwain water can help alleviate the symptoms too.

6. For Cough and Cold

CommentsOne of the traditional home remedies for cold and cough is sipping on a glass of ajwain water. Ajwain is also part of many traditional kadha recipes for this reason. Adding a few tulsi leaves to this makes the decoction more effective. Boil a tsp of ajwain and a few tulsi leaves in a glass of water can help when you are suffering from cold related congestion.

Advantages of everyday herbs and spices in the Indian kitchen are many. We only have to look closely and we'll find the plethora of home-remedies sitting neatly on our kitchen-shelves, waiting to be discovered and used by us.