Why You Should Keep an Eye on Your Kid's Calorie Intake 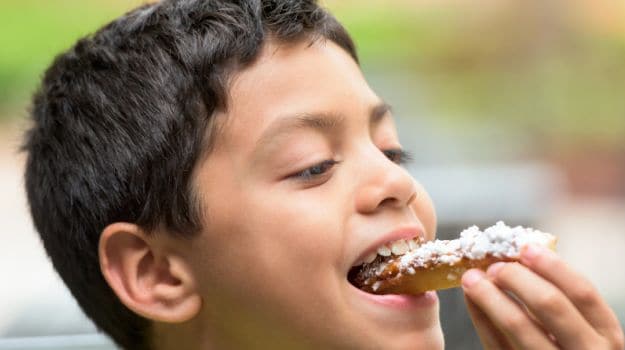 Most children overeat when served large portions of calorie-dense popular foods - but manipulating calorie-content and portion size of children aged three to five can substantially reduce their overall caloric consumption, a study has found.

"With acceptable and readily available products, strategies to reduce calories can be easily implemented in homes and childcare settings and can be strategically combined with changes in portion size by serving larger portions of lower-CD foods with smaller portions of higher-CD foods," said co-author Barbara Rolls from Pennsylvania State University, US.

"These strategies that moderate the effects of portion size are practical and effective in reducing calorie intake. However, policy makers and food producers need to provide the resources and products to help parents and caregivers counter pervasive influences," Rolls added in the paper published in the journal Physiology & Behavior.

The team varied the portion size and CD, or number of calories per bite, for lunch served to children in their normal eating environment.

Lunch was served in three childcare centres once a week for six weeks to 120 children aged three to five. The lunch menu had either lower-calorie or higher-calorie versions of chicken, macaroni and cheese, vegetables, apple sauce, ketchup and milk.

When served a combination of larger portion and higher CD meals, the children's intake increased by 175 calories, or 79 percent, in a single meal.

Children's ratings of the foods indicated that the lower-calorie and higher-calorie meals were similarly well liked, the results showed.

There is a belief that young kids can self-regulate their food intake.

Promoted
Listen to the latest songs, only on JioSaavn.com
“Strategically moderating the portion size and caloric density of foods typically consumed by children could substantially reduce their caloric intake without affecting acceptability,” Rolls explained.