Travel through the swarming streets of Old Delhi and let delicious aromas take you places. 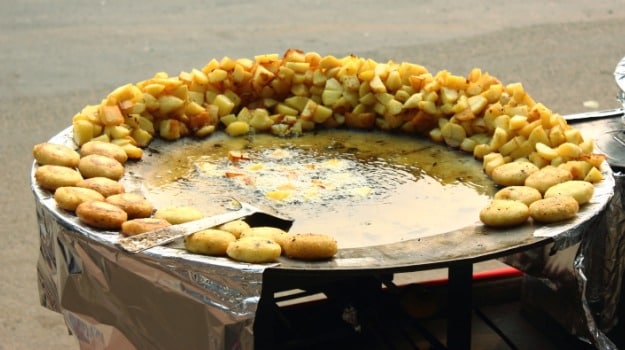 Highlights
The narrow gullies of Old Delhi narrate many stories through the overwhelming variety of street food that they offer. They'll inspire you to pull out your cameras, explore new ways, and sometimes, even get into the kitchen and recreate. While walking through the chaotic maze of by-lanes, you can never be lost. If ever you are, you'll probably catch the whiff of steaming samosas still hissing from the hot oil or the sweet aroma of crisp jalebis that will lead your senses. Temptation is everywhere and it's hard to resist.
The old city shares an intimate relationship with food that began during the Mughal era. Here, traditions rule and history is served sumptuously garnished with culinary secrets that have been passed down through generations.
It wouldn't be wrong to say that a part of me belongs to the other side. My grandmother spent her early days here before she got married. From the countless trips I've made to visit my extended family, I've learnt that finding the best street foods in Old Delhi is a journey of discovery. But to start with, these places will give you a glimpse of the historic heart of the city. Presenting, a food lover's Old Delhi.

Natraj is located near Bhai Mati Das Chowk at the turning to Chandni Chowk metro station. It was started in 1940 and is run by Inder Mohan. They have only two items on the menu – dahi bhalla and aloo tikki. Both are worth a taste.

For kulfi, you can't do better than these sweet shops in Sitaram Bazaar. Here, these creamy concoctions are at their best. Lala Duli Chand Naresh Gupta is one of the oldest outlets and is known for its fruit flavoured kulfis especially, the seasonal mango kulfi. These places also offer a new breed of innovative flavours like tamarind, rose, aam papad and kewda.

You'll find them hawked around places like Dariba, Kinari Bazaar and Daryaganj. They sell a frothy, creamy sweet, famously known as ‘Daulat ki Chaat'. It is made with churned milk. The soft, cottony foam is carefully collected and served. It is enriched with khoya and saffron and instantly melts on your palate. One of the most sublime sweets, its preparation can take about six hours! It is made through the night and served fresh in the morning.

Daulat ki Chaat, Old Delhi. A winter dessert from Lucknow (where it's called nimish) that used to be made for the ruling aristocracy of Nawabs. It's made of whisked milk and cream- much lighter than a mousse (I would say its texture is about as light as whisked up egg whites) and covered with a top saffron infused layer. If that's not regal enough the key ingredient in this dessert is morning dew. If you ever wondered what it was like to eat a cloud- this I think is the closest anyone can get. #DaulatKiChaat #Nimish #dessert #dolce #meetha #mousse #cream #saffron #nawab #nawabi #Lucknow #foodporn #foodgasm #indian #indianfood #delhi #delhidiaries #olddelhi #DaribaKalan #PuraniDilli #India #travel #traveller #wanderer #wanderlust #holiday #travelphotography #foodphotography #streetfood #foodtalkindia @foodtalkindia

A photo posted by Anurag (@amarkande) on

Located at the Dariba Kalan Road in Chandni Chowk, the jalebis here are the real deal. A look at those lovely swirls frying in hot oil, then delicately dipped in sugar syrup and you just can't wait to eat them. This shop has been around since 1884. The jalebis here are fried in home-made desi ghee. The founder of this shop, Nemi Chand Jain, is known to have experimented with many recipes before deciding on the final one. The jalebis are soft and are cooked over coal-fire. Another thing that interests me is that they use desi khandsari sugar and not the regular one to make the syrup. That's what we call pure pleasure.

A photo posted by The Bangalore Foodie (@the.bangalorefoodie) on

The cholas here are top of the pile. For those who love their spice, this is as good as it gets. Been on the streets since 1977, the cholas are served with potatoes in a red hot curry, garnished with coriander and green chillies. You'll always find a crowd buzzing around this humble establishment. Reach Barsha Bullah Chowk and ask for Lotan, almost everyone would know about him. Mostly, you'll find him in Chhatta Shah ji.

Mohammed Aziz was a cook in the royal court of Mughal Emperor. One of his sons, Haji Karimuddin is known to have moved to Delhi with an idea to open a dhaba and that's how Karim Hotel was established back in 1913. All meat lovers must make a pit stop at Karim's for their heavenly kebabs and divine mutton nahari.

A photo posted by Aastha Gupta (@aasthag13) on

This is where it all began. The legendary butter chicken was born out of serendipity in the kitchen. The restaurant was originally known for its Tandoori Chicken. These were preserved in marinade trays by adding butter and tomato. When tandoor-cooked chicken chunks were tossed in this sauce, it led to the creation of buttery, creamy goodness that often leaves us licking our fingers.
Address - 3703, Netaji Subhash Marg, Daryaganj, Near Golcha Cinema

Your day starts here with the classic Old Delhi breakfast - bedmi-aloo. Crisp, puffy puris served with curried potatoes can make your day. Another morning staple that you can try here is the Nagori-Halwa, crisp puris served with suji ka halwa. Wash it all down with a chilled glass of lassi. Finish your meal with some crackling jalebis which are not too sweet, just perfect and are also my personal favourite.
Address: Shiv Mishthan Bhandar, 375, Kucha Ghasi Ram,Chandni Chowk

It was started way back in 1971 and has evolved ever since. Tuck into the crisp crusts, stuffed with a delicious surprise. They serve a variety like dal kachori, pyaaz kachori, matar kachori, dry fruit kachori and others.
Address: 1104, Maliwara, Jogiwari, Chandni Chowk, 9911401440

The word 'khurchan' mean leftover scrap.The unique sweet that they serve here is only made with milk. A sticky sweet, khurchan is easy to make. Boil the milk, scrape of the leftovers from the karahi and sprinkle with powdered sugar and pistachios.Bite into the soft, gooey texture and you're in heaven. This small establishment was set up about 90 years ago by Gauri Shankar Jain, an immigrant Uttar Pradesh. He named the shop after his son, Hazari Lal.
Address: 2225, Kinari Bazaar, Chandni Chowk, +91 11 2325 3992, +91 9891 696 163

Bishan Swaroop in tucked away in one of the hard-to-find side streets, but it's worth the effort.  Try their chunky fruit chaat and aloo ke kulle (boiled potatoes that are scooped out and stuffed with chickpeas). These places bring back the old-world feel buried in our modern lifestyles.
Shree Balaji Chaat Bhandar is one of the oldest eateries in Chandini Chowk. Crisp papris draped in yogurt, chutneys and lime, don't miss this essential street eat here.  They use kachaalu chutney in place of the regular tamarind one and that sets them apart.  Another one of my favourites is Lala Babu Chaat Bhandar. Head here for their glorious gol gappas and gobhi-matar samosas.
Address: Shree Balaji Chaat Bhandar - 1462, Chandni Chowk
Bishan Swaroop - 1421, Near Ashish Medicos, Chandini Chowk, +91 9818364070, +91 9654251607
Lala Babu Chaat Bhandar – 77, Chandini Chowk, Opposite McDonald's

You know what they say - where there's smoke, there's flavour. Walk through Urdu Bazaar opposite Gate No. 1 of Jama Masjid and also venture along the side street called Matia Mahal, you'll find a number of vendors who set up their tandoors around late evening. For all your meat cravings, you'll find your fix here. From Mutton Barrah to Tikkas, you can eat until you burst without ever trying the same thing twice. Al Jawahar has particularly been my favourite. From their mutton delicacies like Gurda Kaleji, Biryani and Korma to Chicken Changazi, you'll be hooked.
Address: 8, Jama Masjid Matia Mahal Road, Opposite Gate No.1