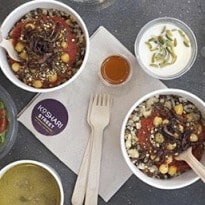 Eating out in London doesn't have to leave your wallet empty. Updating his last guide, Tony Naylor finds the capital, particularly in and around Soho, is home to a thriving casual-dining scene

Koshari is an Egyptian snack food, a warm mix of rice, chickpeas and macaroni, topped with fresh tomato sauce, sold from street stalls and hole-in-the-wall takeaways. Koshari Street - a tiny, slick canteen with limited counter seating - serves Lebanese cook and food writer Anissa Helou's take on this Cairo classic, which she has jazzed-up with toasted vermicelli, crispy, caramelised onions, garlic sauce and an aromatic sprinkling of mixed nuts, herbs and spices. The "hot" tomato sauce is a little meek (there is also a "mad" version to try), but the filling koshari offers layers of bright, interesting flavours. Thanks to that secret doqqa spice mix, you get a heady whiff of something exotic each time you exhale.
• Koshari from £4.50, salads, soups and wraps from £2.95. 56 St Martin's Lane WC2, 020-7836 1056, kosharistreet.com

At lunch and dinner, this small, critically acclaimed cafe-restaurant is a little too expensive for the true budget traveller. Instead, slip in at breakfast to try Sarit Packer and Itamar Srulovich's skilful Levantine cooking at sub-£10 prices. The morning menu runs from baked goods (blueberry and sour cream doughnuts; toasted fig, walnut and orange loaf), to pizza-like lahma breads topped with, for instance, spiced lamb, tahini and pine nuts. There is usually an ijje (herb and feta) frittata on the menu, too. A merguez sausage roll was excellent: the pastry light and buttery, the two spicy lamb sausages nicely moistened by a base slather of vivid tomato sauce. On the side, a dollop of sweetly perfumed harissa added colour and, even at this time of day, you get a little complimentary bowl of chopped tomatoes, tiny hot green guindilla peppers and amazing kalamata olives, as sweet as they are salty and sour.
• Breakfast, £3-£6. 25a Warren Street W1, 020-7388 6175, honeyandco.co.uk

With its blaring music and old copies of The Face left about as reading material, there will be plenty of people who find Attendant too cool for school. And that is before we get to the quirky fact that this subterranean space was once a public toilet. You eat and drink at tiny counters built into an ornate Victorian urinal. Which would be painfully trendy, were Attendant's food and its artisan coffee (Caravan beans, Jersey cows' milk) not as good as they are. It's all relatively simple stuff: almond milk porridge and croissants at breakfast; soup, hot deli sandwiches, salads and Bittersweet bakery cakes at lunch. However, the ingredients used are first-rate and it's all rendered with a quiet flair. A breakfast muffin of Montgomery cheddar soufflé (actually, more a flattened omelette) was exemplary in its detail. Dressed with oven-roasted tomatoes, buttery pan-fried mushrooms and fresh baby spinach, every element tasted vibrantly of itself. That shouldn't be a surprise, but it is.
• Sandwiches and hot dishes around £3-£5.50. 27a Foley Street W1, 020-7637 3794, the-attendant.com

This specialist Scandi food store and cafe offers what can only be described as a smorgasbord of food to eat-in or takeaway. You can start your morning with toasted sourdough sandwiches, a smoked salmon and egg roll, or a Nordic rye and oat porridge that will put hairs on your chest. Then, for lunch, the kitchen dishes up numerous varieties of mix 'n' match wraps and open sandwiches (tiny, moreish meatballs in a sweet, sharp beetroot cream; smoked mackerel with fennel and crushed peas), accompanied by various salads. These might include new potatoes in a dill vinaigrette, or sharp, spritzy shredded white cabbage and oregano. The portions don't look huge, but, rest assured, those dark, heavy Scandinavian breads will fill you up. Of course, the cardamom-spiked kanelbullar swirls, sticky with cinnamon jam, are excellent; as are the smiley, eager-to-please staff.
• Breakfast £2.25-£4.50, lunch £2.95-£9.95. 61 Great Titchfield Street W1, 020-7580 7161, scandikitchen.co.uk

Made from 35-day aged beef (sourced from ace butcher the Ginger Pig), these thick patties - and Honest Burger's salty, rosemary-flecked, skin-on chips - are legendary across London. Arrive early to grab a seat or, if you're looking to keep the cost down, takeaway and dodge the queues altogether. At £9.50, the eponymous Honest burger may sound expensive, but this is the sort of profoundly beefy burger - charred with a sensational crust on the outside, but still juicy and pink within - that will live long in the memory. It is complemented by a not overly sweet caramelised onion jam; dill-and-mustard-seed pickled cucumber; and superb thick-cut smoked bacon.
• Beef burger and chips from £8. 4a Meard Street W1, 020-3609 9524, honestburgers.co.uk

With its utilitarian, white-tiled interior, hip music and good coffee, F&G is quintessential modern Soho. A basement bakery keeps the counter filled with fantastic cakes (rich, ganache-like chocolate brownies are particularly brilliant, £1.70), and breads that are used at lunch for "saucy buns", filled with, for instance, slow-cooked pork, jalapenos, smoky tomatoes and mozzarella, or buttermilk fried chicken with avocado and garlic mayonnaise. My shredded beef and cheddar bun could have done with more of the advertised beef juices, but it was tasty enough. There are gourmet salads (such new potato with roasted lemon and radicchio), sandwiches and frittatas available and, in the evening, Foxcroft serves sourdough pizzas with innovative toppings.
• Breakfast/weekend brunch, £2.80-£9.50, lunch £3.50-£6.50, pizzas from £4.95. 3 Berwick Street W1, 020-3602 3371, foxcroftandginger.co.uk

The gilded rise of brothers Thom and James Elliot, from street food sensations to proper restaurateurs (of course, they already have a glossy cookbook out), may rankle with those who, romantically, regard street food as eating's punk rock: a matter of grassroots passion, not a career. However, it is difficult to carp when, thanks to the Elliots, you can now takeaway A1 pizza, in the middle of Soho, from £6. Whichever way you slice it, that has to be a good thing. Pilgrims' bases are somewhat thicker and softer than you might expect, yet blackened with patches of delicious char. Toppings run to the spicy Calabrian 'nduja, fennel sausage, portobello mushrooms and truffle, but the house-blitzed San Marzano plum tomato sauce is so vibrant it will, finally, make you understand why the Neapolitans love a cheese-free marina pizza. On a sunny day, take your pizza around the corner into the Soho Square gardens.
Pizza lovers should note that, at the time of writing, the renowned (and, for my money, marginally better) Franco Manca were about to open a site on nearby Tottenham Court Road.
• From £6 takeaway, £7 eat-in. 11 Dean Street W1, 020-7287 8964, pizzapilgrims.co.uk

When discussing tasty, affordable curry in central London, two venues come up again and again: the canteen at the Indian YMCA (41 Fitzroy Square, W1) and the £6.95 daily buffet at Diwana Bhel Poori, close to Euston station (121-123 Drummond Street, NW1, 020-7387 5556). For the ultimate in budget dining, however, neither can compete with the take-out, lunch-box deal at Tamil restaurant Chettinad. Served in a moulded, airline-style tray, it comprises a nibbly starter, three curries, raita, a roti and rice, for £3.75 (vegetarian) or £3.95 (meat). No, that isn't a typo. That is a full meal for under four quid. Impressively studded with fresh herbs and spices, a couple of tiny, lukewarm bhajis were a bit tough and leathery, but rest of the food was remarkable for the money. The rice had been winningly mined with cashew nuts, lentils and mustard seeds and, like the best south Indian food, the curries were restrained in their heat, allowing well-rounded flavour to shine through. On a cold day, a melting, slow-cooked chickpea curry in a rich tomato sauce was first-rate comfort food. Note: you can eat-in and takeaway for under £10 in the evening, too.
• Lunch box from £3.75, takeaway, eat-in lunch £6.95. Evening curries with shared rice,from around £8. 16 Percy Street W1, 020-3556 1229, chettinadrestaurant.com

Served in blisteringly hot stone bowls, which cook the ingredients as you eat, bibimbap is a Korean mixed-rice dish of seemingly endless variations. One of which is catching on in central London, too. Bi Bim Bap has just opened a second site in Fitzrovia, in addition to its Soho original. My traditional dol sot, a mixed vegetable version with mooli, daikon, spinach and more, was surprisingly tasty, a fried egg giving it a lovely creamy texture. You can add sinus-clearing gochujang chilli sauce as you go. The staff will happily explain the intricacies of all this to any bibimbap virgins.
• Bi Bim Bap from £6.45-£9.95. Branches at 11 Greek Street and 10 Charlotte Street W1, 020-7287 3434, bibimbaplondon.com

The Theobalds Road branch has a slightly weird farmhouse kitchen look (as if set-up for a modern British tea room, rather than a busy Vietnamese cafe), but the Bay's food hits the mark. Behind the counter, a huge grill keeps the meats coming for bun salads and banh canh soups, both made using homemade noodles. They also server creditable banh mi, Vietnamese baguette sandwiches, which aren't the best in London - you'll have to go further east for that - but are authentically lighter than their French cousins; the meats deliver good flavours and, crucially, the shavings of pickled carrot and mooli are sharp enough to jangle your taste buds. Elsewhere, the menu runs from a six-hour simmered pho to savoury banh xeo pancakes.
• Takeaway banh mi, £4.35, noodle dishes and rice boxes from £5.50. Branches at 4-6 Theobalds Road, Holborn, WC1, 020-7831 4079, and 21 Rathbone Street W1, 020-3609 4830, banhmibay.co.uk

• Travel between Manchester and London was provided by Virgin Trains