Chef Gary Mehigan on his love for food and travel, specialities of South Australian cuisine and what he admires most about Indian food. 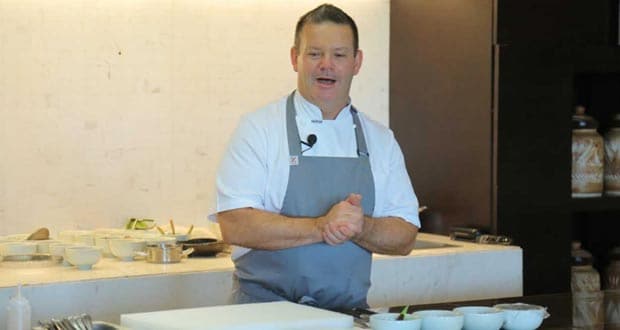 Ever since renowned chef Gary Mehigan became the brand ambassador of South Australian Tourism in 2017, he has been focussed on bringing forth the best of South Australia's local ingredients to the world. Currently on a trip to India and after hosting a masterclass in Mumbai, Chef Mehigan flew to New Delhi to dish out some amazing food secrets at a masterclass organised recently. We caught up with the celebrity judge at this special event held at Hyatt Regency, New Delhi to chat about his love for food, the many specialities of South Australian cuisine and his views on the similarities between Australian and Indian food.

"It started back in 2012, I and Chef George Calombaris first went to the Australian Fest in which we organised a few events, and I knew that I had to be a part of this. Since then, this is the first time I have gotten the opportunity to spread awareness about South Australian cuisine. I have lived in Australia for over 27 years now, and it is a privilege to do something for your country. I am part of a program that involves politicians, musicians, artists and I feel it's great to help people know how food forms a big part of Australia."

An ecstatic Chef Mehigan adds, "While most overseas tourists would want to indulge in sight-seeing, in my perspective, if I am looking for a holiday, I don't think about planning my to-do list and historical places to sight-see. As a foodie, I love to look at food references; where all do I have to go and which season is the best to enjoy a particular dish and what do I want to experiment there. So if you are a food tourist, South Australia is the place to be. South Australia, according to me is a one-stop destination for world-class wine and unbeatable gourmet food and produce."

Chef Gary Mehigan On Australian Food And Its Influences

"I think it's purity and freshness of ingredients that defines South Australian food. From the crystal clear lakes to fresh farmers' produce, local producers and artisans, all of them have a cutting edge in terms of food production, making them important factors that set Australian food apart. Apart from being the finest cheese producer in the world, South Australia is blessed with some of the greatest seafood; ranging from tuna, kingfish, scallop, oysters, et al. Australia is said to be one of the biggest agriculture producing countries too."

As a part of the Masterclass, Chef Mehigan demonstrated a variety of delicacies using fresh produce from the state of South Australia. He says, "Australian food is more about texture, so we love more of gooey, crunchy and spicy food, which is also what Indians like. Australian food tends to gravitate towards Japanese and Vietnamese food. We have got a huge immigrant population from places like Greece, Italy and Vietnam, all of which have had a great influence on our cuisine."

As a part of the Masterclass, Gary demonstrated a variety of delicacies using fresh produce

What is it that excites him about Indian cuisine? "Indians have mastery in spices and I think there is no other country that uses spices like India does. I remember an Indian chef telling me that they use about 32 spices in their cuisine and, on the other hand, I use only four of them. I like how the Indian palate is tempered with these flavours."

Here's what Chef Mehigan prepared during the Masterclass:

The Masterclass started with delicious South Australian cheese, red veined sorrel, roasted walnuts, honeyed figs, and quince paste on a flaxseed cracker, followed by kingfish brined with salt along with furikake crusted avocado, shiso and caper leaves, crispy garlic with yuzu soy sesame dressing. The third dish was crispy prawns with green rice flakes, which is popularly consumed in South Australia. It was paired with pomelo and Vietnamese dipping sauce called nuoc cham, which is made with lime juice and fish sauce. The Masterclass concluded with the showstopper dessert that had almond cake topped with syrupy Australian fruit called quandong with sticky figs and yogurt ice cream, which was placed on some cookie crumble. Native to Australia, quandong is an exotic fruit that is part of the sandalwood family and has a sweet-sour taste that adds to the flavour of the dessert.

kingfish brined with salt along with furikake crusted avocado, shiso and caper leaves

crispy prawns with green rice flakes, which is popularly consumed in South Australia

As a bonus, he recommended two restaurants in Adelaide that you must visit on your trip to South Australia.

Chef Gary Mehigan will be back to India in November to shoot for his new series that discovers regional cuisines where he will be adding his own touch to local flavours. He adds, "There are going to be more associations in the near future that will help me understand Indian cuisine better."