The actor had a close-knit midnight celebration with his family. 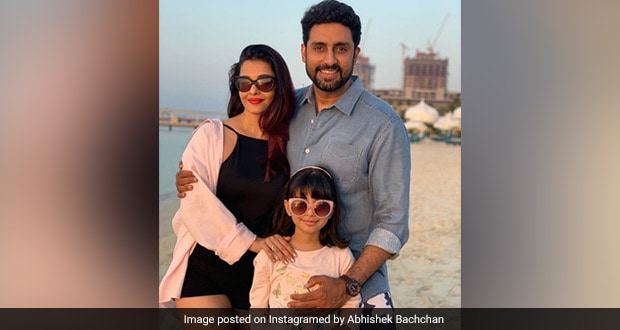 Bollywood actor Abhishek Bachchan celebrates his 44th birthday today. A doting son, loving husband and father of one, Abhishek prefers celebrating special occasions with family which is quite evident from his holiday pictures, festival posts on social media etc. His birthday is no different. The actor celebrated his big day with his family, including parents Amitabh and Jaya Bachchan along with wife Aishwarya and 8-year old daughter Aaradhya. His wife and actor Aishwarya Rai Bachchan took to Instagram to share the close-knit affair with their followers.

The midnight family celebration was completed by a cute looking cake. The two-tier cake was full of actor's favourite things and passions. The 'Dhoom' actor is known to be sports enthusiast that also led him to co-own a football team, 'Chennaiyin Football Club' along with Indian cricketer, Mahendra Singh Dhoni. And so his cake had to have a football on it along with an iPhone image on the cake with '44' written over it. Seems like junior AB is also a tech geek! The cake had 'Happy Birthday AB' written on it. The proud wife posted the images with the caption, 'Always'. Look at the heartfelt post below-

A post shared by AishwaryaRaiBachchan (@aishwaryaraibachchan_arb) on Feb 4, 2020 at 12:35pm PST

Aishwarya also took to social media for a cutesy wish on behalf of their daughter, Aaradhya. She posted adorable pictures of the three of them with the caption, 'HappyBirthday Babyyyy-Papaaaa Love LOVE LOVE ALWAYS'. Abhishek replied to the wish with several heart emoticons on the comments section.

A post shared by AishwaryaRaiBachchan (@aishwaryaraibachchan_arb) on Feb 4, 2020 at 12:45pm PST

Abhishek has been entertaining his fans for over two decades now. Last seen in Anurag Kashyap's 'Manmarziyan' in 2018, the actor has been away from the silver screen only to be back with a string of movies. The line-up includes 'Ludo', 'Big Bull' and a standalone film on Bob Biswas. With so much to look forward, here's wishing Abhishek Bachchan an amazing year ahead!