Anil Kapoor recently posted some pictures of himself on the beach and the internet went into a collective meltdown. Here's what he said about his diet. 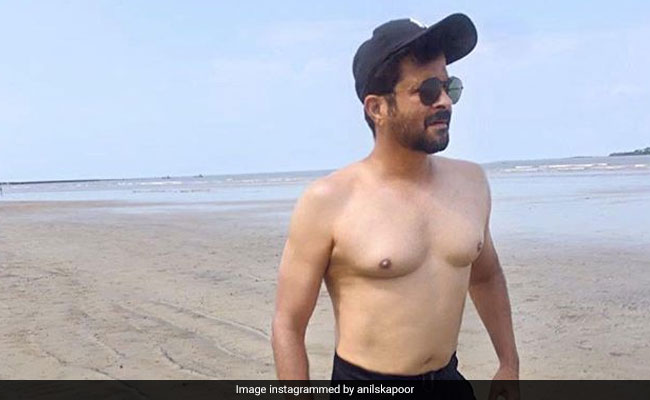 Anil Kapoor has been giving us major fitness inspiration recently.

If there's one actor who seems to be getting younger every day, it has got to be Anil Kapoor. Pictures of him shooting for his last film 'Malang' earlier broke the Internet, with people all over exclaiming about how young he looked. He hasn't looked back ever since. While we all sat on our couches binge watching sitcoms while in lockdown, Anil Kapoor has gotten fitter and how! The actor recently posted some pictures of himself on the beach and the internet went into a collective meltdown. Take a look:

Anil Kapoor admitted in the caption of the post how food is his ultimate weakness. "Everyone has a weak point. Mine is food. The Punjabi boy in me needs the taste buds ignited, my eyes always bigger than my belly," he wrote.

Further, he explained how he decided to achieve his fitness goals in the period of lockdown with a 'new approach to eating'. For this, he took the help of his son Harshvardhan Kapoor and fitness trainer Marc Mead. Anil Kapoor wrote, "During lockdown, I have set myself the task of achieving a new sharper look. This new look needs a new approach to eating. Both Harsh and my trainer Marc have taken it upon themselves to remind me constantly and lay down eating plans."

But the struggle to put a diet plan in action is quite real, especially in the period of lowdown. Anil Kapoor admitted, "I try and I battle. Some times I even fall. And what I've learnt through it all is that a chain is only as strong as its weakest link."

Thus, the only solution to this dilemma was that the diet plan becomes a family goal and not just Kapoor's personal one. Anil Kapoor explained that it was, in fact, the support system from his family that motivated him on the quest to fitness. "So everyone in the house had to get involved. From those who kindly cook my food to the support of my family gathered round me at meal time. Fitness is never a one man/women crusade, it's about support and encouragement when we need it the most. (Always get family involved and on board to help you in any diet if you wish to make it truely a success). Is it easy? Not always, if I am honest. Some days the Punjabi boy sulks a little, but then some days, like this day with this picture... it makes it all worth it," he concluded.

So, dust up those runners, avoid greasy food and get fit, with family in tow! Kudos to Anil Kapoor for providing much-needed lockdown fitness inspiration. We hope to see more such tips and tricks from him in future too.