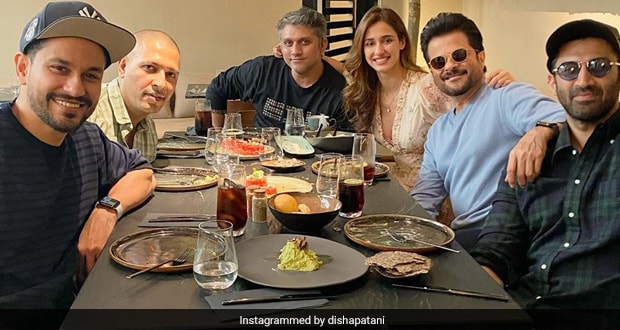 Team Malang celebrated their success with a lunch bash.

Action thriller 'Malang' continues to reign supreme at the box office, as the film has crossed the 50 crore collection mark within its second week. As it rakes in all the box office moolah the actors and director of the film took some time out to celebrate its success. Disha Patani, Anil Kapoor, Aditya Roy Kapur and Kunal Kemmu went out for a celebratory lunch along with director Mohit Suri. Actress Disha Patani shared a few glimpses of the delicious dishes that Team Malang savoured at their outing. Take a look at her post:

"Lunch with my Malangizz," wrote Disha Patani in her post sharing a click of Team Malang taken post they all had eaten. Her Instagram stories had the actress share a video with glimpses of a few dishes that the actors were eating. They were all smiles for the camera, including Anil Kapoor who ate on camera his sumptuous looking Fettucine Arabiata. The pasta was green, thus, it may have been made with some healthy leafy greens in it like Zucchini or Kale. He devoured it on camera, taking in mouthfuls of the delicious looking pasta.

Aditya Roy Kapur was eating what seemed to be an eggplant parmigiana. He was fully focussed on the dish, with just an eyebrow raise for the camera. Disha Patani herself was eating a colourful salad with greens, squash and cheese. Team Malang's lunch was accompanied with some drinks and breads to complete the meal. Take a look at the stories:

More power to the actors and may they share more such glimpses from their foodie outings soon!