The KGF actor's birthday was made memorable by larger-than-life gifts by his fans, including a 5000kg cake and a 216 feet cutout or installation. 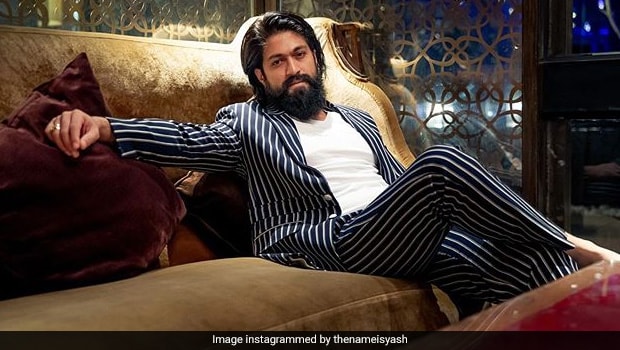 KGF star Yash celebrated his birthday in the most larger than life manner possible!

Kannada superstar Yash celebrated his 34th birthday on January 8, 2020. The KGF actor's birthday was made memorable by several larger-than-life gifts by his fans, including a 5000kg cake and a 216 feet cutout or installation. Yash was seen in his 'Rocky Bhai' avatar from the movie KGF in the cutout, donning a hammer in his hand with an angry look. The installation was quite similar to those made on the birthdays of other superstars like Rajinikanth and Ram Charan. The cutout is being touted as one of the World's largest cutouts at 216 feet.

Coming to the 5000kg cake which was cut in Bangalore last night, it was indeed an overwhelming gesture for the actor. The cake was a tribute to the actor by his fan Venu Gowda. The preparations of the cake were tremendous as it required ingredients on an equally grand scale. What went into the 5000kg cake was 1800kg of flour, 1150 kg of sugar, 1750 kgs of cream, 22,500 eggs, 50kgs of dry fruits and 50kgs of ghee. The cake measured a whopping 40 by 70 feet and was prepared and set up at the Nandi Links Grounds in Nayandahalli, Bangalore. A video of the process of preparation of the cake had surfaced on a fan page of the actor. He was also seen cutting the cake and celebrating his special day with his fans and wife Radhika Pandit.

The cake earned a title for itself for being the World's Biggest Celebrity Birthday Cake, as certified by World Records India. The official certificate that has also surfaced online mentioned the occasion of Naveen Kumar Gowda, aka 'Rocking Star Yash' and how his fan made the largest birthday cake to pay a tribute to him. Superstar Yash's cake was prepared by Sri Ram Bhavan Sweets & Bakery with the help of 20 team members who toiled for a total duration of 96 hours to make the mammoth treat.

That's not all that happened on the actor's birthday - as there was another surprise in store for him from his wife Radhika Pandit. The couple's daughter Ayra and Yash's wife Radhika Pandit took over his Instagram and Twitter account and shared a video of them baking a cake from scratch on the actor's birthday. Radhika Pandit wrote in the caption, "We have taken over your account like we've taken over your life. Happy birthday to the one and only #RockingStar from your biggest fans! #HackedWithLove #AyRadhika #RockingHabba2.0"