'KGF' superstar Yash took to Instagram to share a truly endearing video of himself with his daughter Ayra having a grueling eating session with an unexpected result. 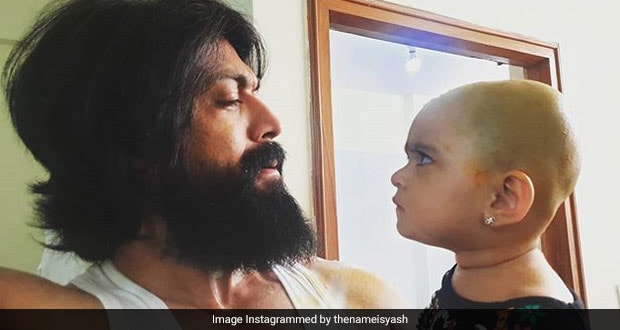 To prevent the spread of the Coronavirus epidemic, the government has ordered a complete lockdown. As a result of this, everyone is home-bound with no possibility of venturing out. People are making the maximum of their time home, spending it with their family, friends and loved ones. This includes 'KGF' superstar Yash, who took to Instagram to share a truly endearing video of himself with his daughter Ayra having a grueling eating session with an unexpected result. Watch the video here:

Kannada superstar Yash is married to Radhika Pandit and they have a one-year-old daughter Ayra, who was the baby featured in the video that Yash shared. The video had baby Ayra trying to be fed by her father Yash, who gives up when she starts feeding him instead. She dedicatedly keeps feeding him rice and lentils with a spoon, spilling much of it on his t-shirt in the process. And when Yash tries to make her eat something too, she directly refuses.

"And I surrender...P.S "Perks of home quarantine" my t'shirt doesn't agree though. Stay safe everyone!" wrote Yash in the caption of the video. The actor regularly shares pictures of himself and his daughter Ayra on his Instagram handle. Yash's birthday falls on 8th January, 2020 and to mark the special occasion his wife Radhika Pandit and daughter Ayra had baked a cake for him too. Check out the video:

On the work front, Yash will be seen in the film 'KGF Chapter 2'. The Kannada film will also see appearances by Bollywood actors Sanjay Dutt and Raveena Tandon. We wish him all the very best for his endeavours and we hope to see more such glimpses of his daughter Ayra's foodie side too!