Stressing on the need of such solutions, Harsh Vardhan pointed out that there has been an alarming increase in non-communicable diseases 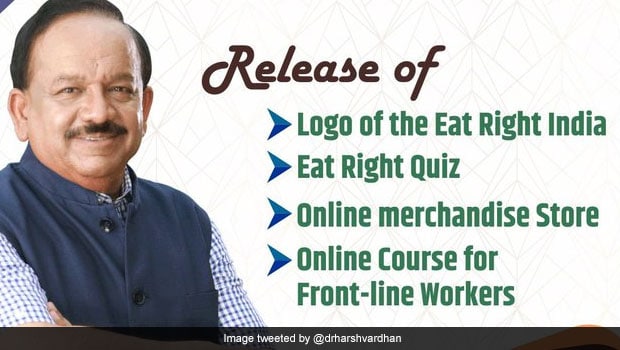 In the wake of the roll out of Poshan Maah (nutrition month) 2019, which has gained momentum over the past few days, Union Health Minister Harsh Vardhan has launched a year-long social and mass media campaign 'Eat Right India' that takes integrated measures to improve food habits to promote health and sustainability. This program is designed on the lines of the international campaign ‘The Green Good Deeds', which became hugely popular. 'Eat Right India' movement has been set in motion and vying to become a global success, for which, the minister is seeking media organisations' assistance to spread the key messages of the program far and wide.

"The 'Green Good Deeds', a campaign to protect environment and promote healthy living, has found global acceptance, and the 'Eat Right India' movement is also set to become a global best practice with the support of national and international stakeholders," the health minister said.

To give impetus to the ambitious campaign, the health minister launched 'Eat Right India' logo that represents a healthy plate of food. Other initiatives were also floated by the ministry to propel the flagship nutrition program. These include an online 'Eat Right Quiz', the 'Eat Right Online Course' for frontline health workers and the 'Eat Right India Store' showcasing merchandises to promote healthy eating habits.

Stressing on the need of such solutions, Harsh Vardhan pointed out that there has been an alarming increase in non-communicable diseases like diabetes, hypertension and heart diseases, and widespread deficiencies of vitamins and minerals and rampant food-borne illnesses; and these problems need to be addressed at the earliest.

Poonam Khetrapal Singh, Regional Director, World Health Organisation (WHO), said, "The message of the 'Eat Right India' movement is what the WHO has been saying all along. There has been a shift in the mortality due to communicable diseases, to non-communicable diseases like diabetes, hypertension, heart disease and cancer across the world."

Food Safety and Standards Authority of India (FSSAI) is heading the 'Eat Right India' campaign with the support of other nation-wide programs like Poshan Abhiyaan, the Anaemia-mukt Bharat, the Ayushman Bharat Yojana and the Swachh Bharat Mission.

‘Poshan Maah' was launched on September 1, 2019 by National Council on India's Nutrition Challenges, which declared the entire month of September 'Rashtriya Poshan Maah'. The policy was strongly backed by Prime Minister Narendra Modi who urged people to actively support the holistic nutrition campaign.