Smriti Irani took to Twitter to share a dish created by a 13-year-old chef from Nagaland, under the POSHAN Abhiyaan or National Nutrition Month. 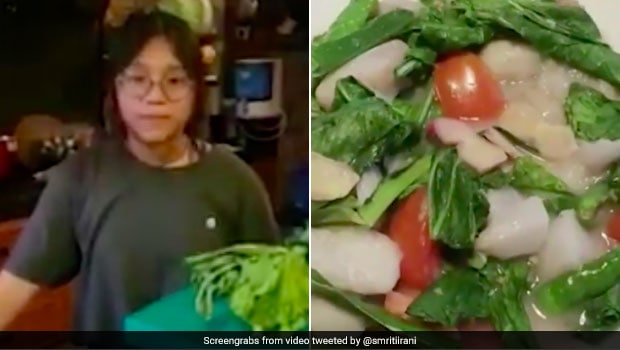 India is a country known for its cultural diversity. Every state has its own language, style of dressing and even its own cuisine. There are so many hidden gems of Indian cuisine that lay unexplored, which are now coming to the forefront. Indians are willing to try new and innovative dishes - this is why regional food is gaining immense popularity these days. Smriti Irani took to Twitter to share a delightful regional dish created by a 13-year-old chef from Nagaland. Take a look at her tweet:

13-year-old budding Chef Ayim Imchen
from Dimapur has learnt a traditional dish from her Grandmother. This simple nutritious recipe from Nagaland is just the tip of the huge iceberg called Indian cuisine. Share your traditional family dish: https://t.co/zCSxOiHQrU#Local4Poshanpic.twitter.com/5EIerEpxKZ

Smriti Irani wrote in her tweet about Chef Ayim Imchen, who is a budding chef hailing from the state of Nagaland. She is all of thirteen years old and she aimed to recreate a delicious Naga Yam stew, which was originally made by her grandmother. The ingredients for the healthy Naga stew were Yam, mustard leaves, tomatoes, chilli and ginger.

In the video, Chef Imchen explained how cooking with mustard leaves and ginger was a traditional way of cooking in Nagaland. She revealed how her grandmother would recall her great-grandmother cooking the exact same way. The comforting Yam stew was quite easy to make and ready in no time. Chef Imchen suggested it could be eaten with steamed or sticky rice.

The healthy recipe made with Yam is not just wholesome in taste but also enriched with nutritional goodness. Yam is known to be an excellent source of dietary fibres and is also enriched with Potassium. "This simple nutritious recipe from Nagaland is just the tip of the huge iceberg called Indian cuisine," said Irani in her tweet. She further asked users to contribute their own traditional family recipes as part of the government's ongoing POSHAN Abhiyaan or National Nutrition Month.

Every family has an inherited yummy recipe!

Why don't you share that classic recipe with us!

Use @mygovindia link https://t.co/zLZiGb8TlZ to participate and become a part of #POSHANMaah2020.#Local4Poshan#SahiPoshanDeshRoshan#POSHANAbhiyaan@smritiirani

The POSHAN Abhiyaan is being celebrated all through September in order to bring about discussions around healthy food. There have been a series of activities organised by the government, and one of these is the contest of sharing traditional family recipes with good nutritional value. The month is on till 30th September 2020 so if you have any good recipes that you'd like to share - do participate!