Two-year toddler Grey Meeker is out-of-this-world cute, and his videos prove that he is a big foodie and well-mannered too. Take a look at the viral internet sensation! 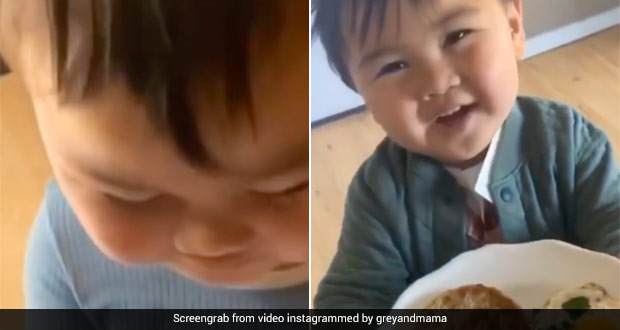 Grey is just two years old, but his manners will impress you.

If there's anything that the internet loves more than pet videos, it has to be baby videos. Babies going about their usual antics are an absolute delight to watch, and if there's food in the videos, even better! Recently, the videos of a baby chef cooking by himself in the kitchen had gone viral garnering millions of views. And if you couldn't get enough of him, check out another toddler who loves his food even more. Two-year toddler, Grey Meeker, is the latest baby to become an internet sensation. Apart from the fact that he is out-of-this-world cute, his videos prove that he is a big foodie and well-mannered too. Take a look:

(Also Read: One-Year-Old Chef Is Taking Over Instagram With His Cuteness And Cooking Skills!)

The viral video was shared on Instagram handle operated by Grey's mother, @greyandmama. "My sweet little thankful boy," she wrote in the caption on social media. The video was basically a compilation of all the times she was handing her little one something to eat, and he would excitedly take it from her but not without sweetly thanking her. The many dozen "Thank you, mama!" dialogues came in succession one after the other, making for the most adorable watch that would definitely bring a smile to your face.

The account on Instagram has been active only since 1st of June, and it has already clocked in 145k followers, and counting on Instagram. Grey's mother regularly shares photos and videos of the cute toddler much to the internet's delight. Here's another one in which Grey can be seen thanking his mother over and over again for giving him a donut. "Classic Grey - he says "thank you" over and over if he REALLY loves something," explained his mom in the caption. Take a look:

(Also Read: This Viral Video Of Baby Rubbing His Food Over His Belly Is Too Adorable)

These adorable videos have been getting several excited comments and reactions from viewers, who can't help praising the well-mannered and foodie baby. "This is the only kid I will ever like," wrote one viewer while another exclaimed, "I could watch this on repeat!! His lil face. his lil voice. His manners! So sweet!! & all this yummy food!" Another user made an interesting observation, "I love how he waits for you to say 'you're welcome' and he'll just repeat 'thank you mama' until he hears it.."

Did you like these cute videos? Tell us in the comments below!