Viral: A man created a furore on social media by posting a video of cooking macaroni in energy drink. The Facebook video angered many people and went viral. 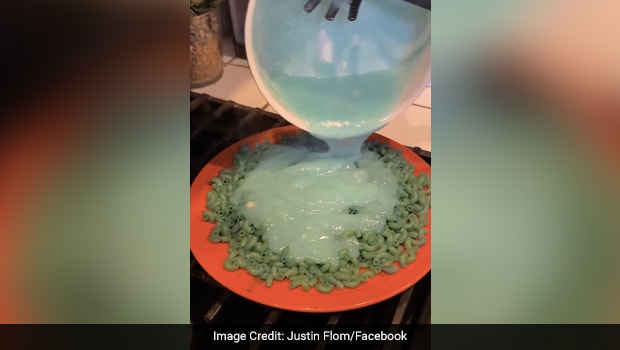 The trend of creating strange food combinations started last year in 2020, but it looks like the fad is here to stay. People found it entertaining to come up with some never-seen-before recipes for their amusement and for that of the internet. The latest one to hit the block is of blue pasta! We have seen red pasta, white pasta and even pink pasta, but blue? We could never even imagine it! But this man did and actually made it - how? By cooking pasta in a blue-coloured energy drink.

A man created a furore on social media by posting a video of cooking macaroni in energy drink. He first poured the blue drink in a pot, boiled it and tossed macaroni in the boiling liquid and pulled out the cooked macaroni in dark blue colour. He then went on to make roux (sauce) for the pasta by first roasting flour in the same energy drink instead of butter and then finished making it with more energy drink instead of milk or cheese. Surprisingly, the sauce turned out to be super creamy but blue in colour. The man then poured the sauce all over the pasta and topped it with a cucumber slice to round up the meal.

If the cooking part didn't bother you much, the ending where the man actually eats a bite of the pasta and moans with 'yum' will surely make you cringe.

The Facebook video angered many people and went viral across the social media platform. It faced the wrath of pasta lovers and also got some marks from a certain sect who was just impressed with the creativity.