A picture of a horizontally cut bread has taken the internet by surprise, and here's how users reacted to it. 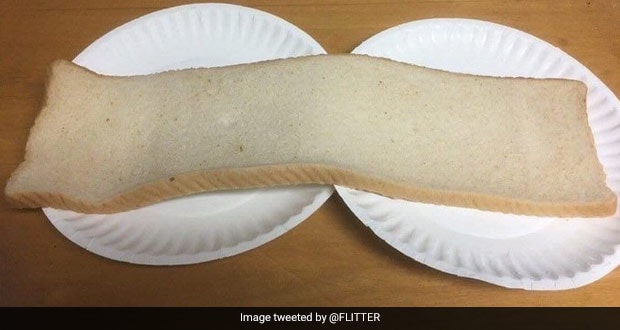 Here's why this slice of bread has gone viral on social media.

The internet is a source of infinite amusement and entertainment for users. Foodies on social media often share pictures and videos of dishes that appal them, be it a pasta made with energy drink or instant noodles dipped in beverages. The latest food image that has gone viral on social media, however, will take you by surprise. Twitter user @FLITTER took Twitter by storm with an image of a horizontally cut bread, which was almost like an optical illusion. Take a look:

(Also Read: Viral Hack To Make 4-Layer Wrap In One Simple Step Will Surprise You)

Rather than square slices of bread, the image featured a single, oblong slice. The bread was so long that it had to be kept on two plates rather than fitting in a single one. "Can't stop thinking about this horizontally cut bread," the Twitter user wrote with the picture.

The bizarre click amassed 591k likes along with 62.2k retweets at the time of writing. Users couldn't help share their discomfort with the strange picture, which was completely unlike anything they had seen before. Some also revealed how this long slice of bread is actually sold commercially in many countries such as Sweden, Brazil and more. A few users also shared how these long slices of bread could be used to make 'pinwheel' sandwiches by spreading the ingredients inside and rolling up the bread to cut it up and serve as individual portions.

Take a look at the reactions:

I hate this so much but I'm not sure why

yes! for the dying art of Pinwheel Sandwiches!

baby showers & wedding showers used to have these adorable pinwheel sandwiches made with great care by the hands of sweet grandmothers.

Now, there is just a gaggle of obnoxious, competitive women in bad Prada refusing to eat. pic.twitter.com/8SrSRt5SAq

You mean that's not available everywhere? How else do you make your perfect 'tea' sandwiches? Big hit in the kids' packed-lunches-for-school. #longbreadpic.twitter.com/BGGbLHcIxj

in brazil, is used to make a type of pie where you use mayo, vegetables and chicken pic.twitter.com/1OGjP5hHoB

That s because you don't know venezuelan 'sanduchon' . Let me introduce you to one of our most secret culinary treasures pic.twitter.com/8S5AEQOuGO

Users also wanted to try this long slice of bread as it would have lesser crusts and a better texture than the usual bread. Some people commented that there would be too much spread and filling required to make sandwiches with this bread.

Would you try this unique bread? Tell us in the comments below!