Viral: A Twitter user posted a picture of French fries stuffed between two dry pieces of bread and it appalled people so much that a full-blown discussion on strange foods started. 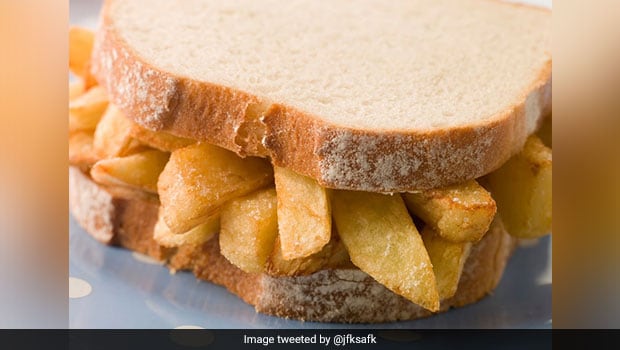 Go anywhere in the world, you'll find a huge fan base for French fries - crispy fried potato chips. Even in India, this is a go-to snack, especially, of kids. But this is probably the first time that the mere sight of French fries irked some people. Why? A Twitter user posted a picture of French fries stuffed between two dry pieces of bread and it appalled people so much that a full-blown discussion on such strange food concoctions found in different countries started.

Apparently, this French fries sandwich is a common English meal and is called 'chip butties'. This American could not hold back his exasperation on finding this unique meal. He shared the picture of the sandwich on his Twitter account and wrote, "Just learned about chip butties, which is an English food that is literally just French fries in between two slices of bread. This is just making me so irrationally angry."

We can't blame him, can we?

Just learned about chip buttys, which is an English food that is literally just French fries in between two slices of bread. This is just making me so irrationally angry pic.twitter.com/O604faAR8K

This Twitter post roused the emotions of foodies around the world who shared their own discoveries of bizarre sandwiches and other meals. The post clocked in more than one lakh likes, 6.4k retweets and 13.2k comments last time we checked.

The long Twitter thread sprung us more such shocking foods. Pasty in burger buns, chips served on bread slices, biscuits and gravy - and more weird recipes will get on your nerves. Even a Brit-American foods war ensued with offended Britishers avenging by sharing equally strange American meals.

Here are some of the strangest recipes shared by the users. Caution: View at your own risk!

Guys this isn't even the worst. (It's actually ok as a one off snack. I got used to it. Thin bread, butter melted & ketchup) BUT When I first came to this country I was served this... when I tell you I felt personally attacked pic.twitter.com/I4ghTw0Ep4

Pulled pork. This is eaten in NC on sandwiches. pic.twitter.com/AuqH8f2Prs

My cousin from uk told me this his go to. He needs therapy pic.twitter.com/LswLLfIERz