Viral Pic: A recent picture surfaced which featured a Manchurian dish made with chocolate balls, and Twitter users lost their appetite. 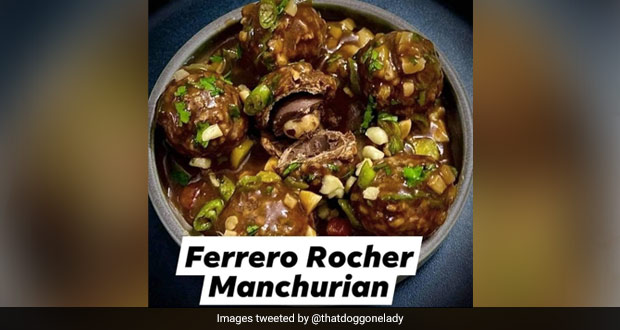 Indians love to innovate with dishes and create their own unique versions of a number of recipes. Indo-Chinese food is one such spinoff of traditional Chinese cuisine. The dishes in the cuisine include the likes of Chilli Potato, Chilli Paneer, Chopsuey and Manchurian. These recipes are widely popular among all age groups and are often made at home or found in the menus of restaurants. However, a recent picture surfaced on Twitter which featured a Manchurian dish made with chocolate balls. Take a look:

Here to annoy you with a photo of the nicest thing I've found online.

The picture of chocolate Manchurian was shared by Twitter user @thatdoggonelady on the micro-blogging platform. "Ferrero Rocher Manchurian" was the name of the dish which was made by combining the original recipe with the popular chocolate. Instead of Manchurian balls, the dish had the spherical shaped Ferrero Rocher chocolate balls in it.

The tweet went viral garnering a number of anguished responses from Twitter users. Several called it the most disgusting fusion food ever, while others retorted that the dish ruined a perfectly good box of chocolate.

Take a look at some of the responses:

Do you think you've it all? No? Then see this not just your regular Rosagula Subz or Ferrero Rocher Manchurian but Maggi Beer!

IDK how old this genius invention is or who is the inventor or how it tastes! ???????? pic.twitter.com/uWzCsdsUBe

Im going to pretend this is photoshop

I thought this^ was the worst thing I'd seen today, until @mekakitoo responded with this horrorshow: pic.twitter.com/Lzcf0f3non

An empty mind is a?? pic.twitter.com/nqhVGbDo87

Whoever thought of some crazy fusion cooking such as this?

Why would anyone do that to a nice bowl of Manchurian?

What a colossal waste of Ferrero Rocher !

This is not the first time such a fusion dish has appeared on social media. Many users earlier have shared pictures of the most bizarre food combinations possible - from chocolate Biryani to noodle-stuffed Pani Puri. While some may find these fusion foods intriguing, most have a hard time digesting them.

What do you think of the bizarre food combinations? Tell us in the comments below!