Adding Salt to Sweet Will Always be a Seller 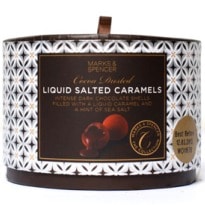 Concerns about hidden salt levels in biscuits are well founded, but conspicuous consumption in the form of salted caramels has won over fans from Nigella Lawson to Barack Obama.

Haunted by fears of high blood pressure? Then put that biscuit down. A survey from campaign group Consensus Action on Salt and Health (Cash) shows that sweet biscuits are saltier than popcorn - or, rather, some biscuits (for example, Asda's Fun Size Mini Milk Chocolate Digestives) are saltier than some popcorn (such as Butterkist Salted). Cash is calling for the food industry to make biscuits less salty. From the digestive-lover's perspective, this is a mistake. The elephant bobbing about in the brackish water of the salt debate is that it makes food taste nice, and biscuits are no exception.

Pastry chef Will Torrent points out: "Salt is among the common ingredients in pastry kitchens. It's a seasoning and will often help the taste of, for example, pastry." Bakers won't be surprised to find that biscuits contain salt, and even before the Cash research, no one bought a giant white-chocolate and raspberry cookie as a healthy snack. But while some worry about hidden salt in sweet things, the trend for conspicuous salting continues unabated.

Nigella's memorably saucy Stylist cover can take some of the credit for salted caramel's popularity, as can Pierre Hermé's salted caramel macarons (recreated here by Edd Kimber), Gordon Ramsay's championing of Artisan du Chocolat's salted caramel chocolates, and, further back, the salty sweets and biscuits of Brittany and Normandy. Even Barack Obama is known to have a favourite brand.

In 2006, Marks & Spencer launched a line of salted caramel chocolates. Customers were "miffed" by the combination and the product failed. Now M&S says salted caramel is a top flavour trend, sold with gammon as well as cheesecake and ice cream.

For ice cream expert Claire Kelsey, adding salt to sweet is the obvious thing to do. "I put at least a good pinch in most of my ice creams to get a depth of flavour," she says. "In my olive oil ice cream, salt lifts the notes of pepper and grassiness, and crumble ice creams taste good because of the salted butter in the crumble." It's not universally popular, however. "I push the salt level in my salted caramel and peanut butter ice cream to the limit, and a few people find the flavour too much."

It can go very wrong. During a chocolate competition, I tasted dark chocolate studded with designer salt. Rough and rocky, it turned the panel into human salt-grinders. But even if it does work, have we seen too much of salt and sweet? Marks & Spencer thinks not, with salted caramel due to feature heavily in the Christmas range. Will Torrent agrees. "It's one of those combinations, like chocolate and raspberry or ginger and lemon, that just go together." To ring the changes with salt and sweet, he suggests good white chocolate that's been tempered with a little salt, and Paul A Young's port and stilton truffles. And of course, until Cash gets its way, we'll always have biscuits. How do you get your salt-sweet kicks?

Divide and conquer ... after one unsuccessful range in 2006, Marks & Spencer will bet on salted caramels again this Christmas. Photograph: Katherine Rose