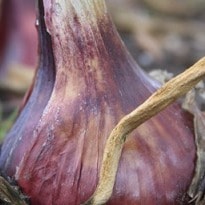 'I like onions a lot. Nearly all my favourite dishes start with chopping them, then sweating them in fat'

There is an argument that it is silly to grow onions because they are cheap, readily available and take up too much space. You'd be better off growing something rarer. Bah to that. I like onions a lot. Nearly all my favourite dishes start with chopping onions, then sweating them in fat. And I like the way a fresh onion tastes. Between those layers of skin, summer is captured.

You either grow onions as sets, which are small onions primed to get growing, or sow seed, but sets are easy to grow and unbothered by slugs. There are two periods to plant them: now and mid-spring. Autumn sets are hardy enough to make it through the winter and give you a crop by early June.

The trick with sets is identifying the bolters: those that run to seed. It's all in the shoulders. Round-shouldered sets make it through the winter; sloping shoulders (or, put another way, more pointed sets) nearly always bolt. Some onions, particularly red ones, are heat-treated in a bid to make this less likely.

Plant the sets 18-20cm apart from each other in a grid, or 7-10cm apart in rows that are 30cm apart. Don't squeeze in extras, unless you want small onions. If your soil is very wet, plant on a ridge or mound so that excessive winter water drains away, or grow in large modules and plant out in early spring. The sets should be planted deep enough that only the tip pokes out. The base plate of the set, where the roots appear, is not as robust as it looks, so don't jam the onion into the earth, but nudge it in. Use a dibbed hole if necessary.

Blackbirds like to play toss-the-onion just as the poor sets start to root. Pea sticks or netting will deter them. If you suffer from allium leaf miner or leek moth, cover the whole bed in a fine net (such as Enviromesh or Veggiemesh). It works, as long as all the edges are sealed. I use hoops to raise the netting off the ground and seal the bed edges with soil. It's a pain to undo for weeding, but it is worth it.

For the widest range of varieties, seed is the way to go. There used to be a limited choice of onion varieties available as sets: 'Red Baron' was the standard for red onions and 'Radar' the yellow equivalent. The range has expanded in recent years. I have a fondness for the Japanese-bred flat onion 'Senshyu' and 'Electric', a red onion with mild flavour. 'Shakespeare' and the more recent 'Tornado' are British-bred yellow onions with milder flavour (autumn onions tend to pack a punch), but cook well. Autumn-planted sets store only until mid-winter, so buy accordingly.