Craft Beer: a Guide for Beginners 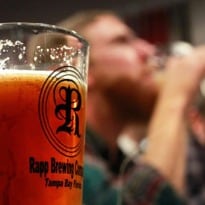 Do you know your Brett yeast from your citra hops? Can you measure your beer's international bitterness units? If not, pass yourself off as a craft beer expert with our cheat's guide.

Once there was real ale. It was safe, steady and you knew where you were with it. But now ale has a hip young cousin: craft beer. It even has its own festivals, such as this weekend's Liverpool Craft Beer Expo. So what's craft beer all about, beyond fashionable beards and American beers? For novice drinkers, we offer this guide. The next round is on you. Cheers!

Real ale solely relates to live, cask-conditioned British beer or its bottled equivalent. The craft crew, however, don't care where beer is from, how it's made or served, so long as - bit vague, this - it's been made with love and it tastes great. Rules are very much there to be broken.

Unwieldy slang for those big, bold, tropically fruity and aggressively bitter beers, where the hops are less flavouring than high explosives. Also known as "hop bombs".

America, that is, not Ireland. UK craft brewers are in awe of the US micros and their punchy, Californian double IPAs. A very healthy internationalism is central to craft beer, with Scandinavia and even Italy embraced as fellow craft hotbeds. This does lead, however, to ...

Costly raw ingredients; smallscale production; export/import duties; the exploitation of gullible hipsters: there are many factors which have come together to make many craft beers bloody expensive. Bring your credit card - £3 halves and £6 pints are now common - or make sure you mix up those hop-forward speciality beers with some cheap, reliable, old-fashioned real ale.

From barrel-ageing, wild yeasts and smoked malts to spirit-laced 'speers', via stouts and porters made with oysters and passion fruit, brambles and coffee grounds (possibly all at the same time), experimentation, innovation and constant change are the hallmarks of craft beer. As are stylistic hybrids. If you want to pass as a confident craft drinker, order a black IPA. It's black beer with a big hop payload and a residual stout character.

The primary bone of contention between the craft rebels and Camra traditionalists. This is good beer, but served colder and fizzier from long-life kegs, just like big brand lagers.

IBU or international bitterness units (yes, it really is a thing!)

Basically, the higher the better. The ultimate craft beer would be almost unbearably bitter, like sucking on a handful of rusty nails and paracetamol that still taste of beer.

The perfect medium or marketing chicanery? Novices probably don't want to get embroiled in that debate. The key thing to note is that, suddenly, cans are cool and bottles are history. If you want to look the part/easily led, grab a tinnie.

Trendy, confrontationally tart beers inspired by farmhouse/saison Belgian brewing styles and usually made - drop this in for instant credibility - with Brettanomyces (or Brett) yeasts.

Faddish concentration on using a single hop variety in a beer, not a blend, so that you can learn about and appreciate its true character, in that slightly knobby way more commonly associated with wine drinkers. It's fine if the hop, say citra (praise its lychee, grapefruit and gooseberry notes), can carry the beer, but often it leads to meek, one-dimensional beers.

Forget Guinness. Serious craft drinker have to be across stout's many milk, imperial, baltic, export and chocolate stylistic variations. Or at least pretend to be. Drinking good stout is a rite of passage, a sign that the craft drinker has graduated from the nursery slopes of sunny pale ales and frivolous IPAs.

Breweries creating limited-edition beers, often in collaboration with other breweries, is one of the craft scene's defining characteristics. It's a boon for the blagger, as there are far too many to keep up with. "Have you tried that Kernel/Marble oak-smoked barley wine? Or the Thornbridge/Magic Rock mint chocolate stout?" you can ask, confident that, if that beer doesn't exist now, it soon will do.

The 'classic', nondescript English bitter that your dad drinks. Brewed by a big regional brewery. It's everything that craft beer drinkers hate, basically. Although, complicating matters, several micros, such as Marble, Grain and Liverpool Organic, now brew their own excellent best bitters.

No, not a stick you lick, but three third-pints on a handy carrying device, so you can taste several beers in small quantities and pretend you're a connoisseur, not a beer monster.

If you want to impress craft nerds, you need to name-drop creatively. You can't just big up Brewdog because you've seen its beers in Tesco. Mikkeller, a roving Danish brewery possibly imagined into life by Franz Ferdinand and David Shrigley, is the last word in indie cool, but for that very reason you're probably best avoiding it. It's a bit obvious. Instead, drop in a few lesser-known foreign brewers (fellow Danes Evil Twin, America's Left Hand, Italians del Borgo) or a niche British barnstormer (Red Willow, Summer Wine). You like Brooklyn lager? Fine, but best keep it to yourself. It's 2013, not 2009.