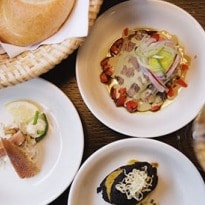 Food designed for sharing is all very well, but today's trendy restaurants serve tiny portions at exorbitant prices. Is it time to re-embrace big plates of food?

For the love of elbow room, I can't do this anymore. If I walk into one more distressed-wood-furnished, naked-lightbulbed, glass-tumblered, formica-loving concept restaurant and walk out hungrier than when I entered, I'm going to move back to Finchley. Because in Finchley everything is served on big plates. Honestly, they're huge.

But in the capital's gentrified (ew) areas - east London, Brixton, Peckham - the annoying food trend that's become as ubiquitous as extra virgin olive oil is now knocking really quite hard on chutzpah's door. It's the same old story wherever you go ...

"Hi, have you been here before?" Yep.

That is my question. How are we meant to share anything that is now ostensibly served on what classifies as a button?

Don't get me wrong. I liked small plates in the beginning. Three years ago, when little rooms serving starters as mains started popping up here and there, I was enthusiastic. I'd got to a stage where, finally, I was comfortable with sh ... sharing. You know, "tapas-style dining" - which is hard to say without moving your head from side to side. I'd been working for years on sharing after a misspent youth hiding the "good" crisps from my brother.

These small plate places were nook-like, cosy, sexily lit and usually had a revered chef on board such as Neil Rankin or Nuno Mendes, who would wink as they personally served you pigeon, scallops, burrata THEIR way, and for a good price. Small plates enabled you to try what great chefs have to offer without having to pay for a whopping great a la carte meal at their Michelin-starred restaurant.

The casual dining approach encouraged you to relax, chat and eat freely with your date, or whoever you were with. The tables were minuscule, sure, but that was all part of the intimacy. And with this small plate trend came the cocky little menu, basically the size of a Sainsbury's receipt just, you know, listing dishes by their ingredients in typewriter font. No pound signs, God forbid:

Oh, you read that as six hundred and thirty pounds? Well, you're an idiot - apparently.

Everyone got so into it. Like buttoned-up shirts. I even started serving stuff on small plates at home, wearing buttoned-up shirts. Cornflakes, porridge, padron blinkin' peppers ... I'd invite friends round for dinner and, God forgive me, in the email I'd put: "Nothing huge, just small plates," because it felt classy, sociable and also because I am a massive twat.

Then someone with a calculator and megaphone stood in the middle of Liverpool Street, central London, and screamed: "There are HUGE profits to be made in small plates!!!!!!", and it was done.

Restaurant owners far and wide fervently climbed the ladders of their parents' attics to unearth the dusty saucers Granny Prunella left behind. Doll's houses were raided for their kitsch crockery. Never mind fixie bikes, not one restaurant owner in Dalston didn't now get to work on a bandwagon. Small. Was. It.

But this lusted-after discreetness (most places did away with fascias, and even names) has got out of hand and become something of a, well, vanishing act. First they lose the sign - nobody wants to look like Masala Zone. Then the tables got smaller - now it's a toss-up between water or bread; there isn't room for both. And then, of course, it was the plates - which increasingly serve portions comparable to what you'd give someone who's just woken from a coma.

Last month I ate at a new one - Mayfields, E9 - and although still finding its feet, the portions were pitiful. "1250" for a little bit of octopus and asparagus? They took the bread away because the water came. I can't live like this! I think back to the halcyon days of L'Artista in Golders Green, when a gigantic plate of spaghetti carbonara blocked my view of the person opposite. Aww.

We're in straitened times, sure. Food prices in this country are about to reach terrifying levels once more, and very soon. But while I've still got my dignity (just), I'm saying NO to small plates. Seriously. Get bigger - or go back to the doll's houses from whence you came.