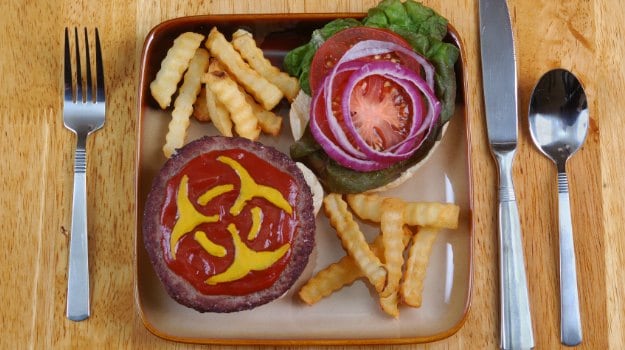 Jeanne P. Goldberg, a professor at the Friedman School of Nutrition Science and Policy at Tufts University, never skimps on ice packs when loading a picnic cooler, and she cautions against putting warm food in them, because the ice won't cool it sufficiently.

"The last thing I want is a food-borne illness," she said. "The effects can haunt you for a long time."

In 2014, the Centers for Disease Control and Prevention estimated that each year "roughly 1 in 6 Americans - 48 million people - get sick, 128,000 are hospitalized, and 3,000 die" of food-borne diseases caused by bacteria, viruses, protozoa and parasites.

Much food poisoning goes unreported, according to Robien. "People typically just manage it at home."

Schwab, Robien and Goldberg are well aware of the statistics, and they're aware that they have less control over their food when they're away from home. But each has found ways to be careful without ruining the pleasure of meals eaten when traveling or when just dining out. And they keep a sense of perspective.

"A healthy person can manage many of the bacteria encountered," Robien observed.

If Schwab walks into a deli and the person behind the counter is not wearing gloves, he might decide against ordering a sandwich even though, he said, there is probably only a low level of risk.

At a chain restaurant, he says, there is a distinct probability the ground beef may hold pathogenic microorganisms because meat from hundreds to thousands of cows is mixed together, increasing the potential for pathogen exposure.

So don't eat a hamburger that is bright red in the middle, he advises. Not only does he order burgers well-done; knowing that pathogens populate poultry, he also wants his chicken the same way. Before his children were 3 years old, he was vigilant that their food was thoroughly cooked because their ability to fight infections remained underdeveloped.

When entering a restaurant, the three food experts look for hints of microorganisms. Initially they focus on cleanliness. A location where you can plainly see poor practices is, Schwab said, frequently tolerating even more-serious and more-questionable practices out of sight.

Schwab strives for "situational awareness." So does Robien. "You would be surprised about how much you can actually observe as a customer at a restaurant," Robien said.

"A lot of food-borne illness occurs because of how the food is handled," Goldberg said. "If I have a chance to look in the window to the kitchen, I peek in. Is someone scratching their head while wrapping a sandwich?"

If she has any doubts about the cleanliness, she'll order a pizza right out of the oven instead of an uncooked dish. The experts also pay attention to food temperature. "Cold food must remain cold and hot food must remain hot," Goldberg said.

Hot food that has been sitting out cooling goes into the danger zone, Schwab said, providing the perfect environment for bacteria to replicate. The same is true for cold food growing warm. "If the potato salad is sitting out with no ice underneath or the ice has melted and it is sitting in a pool of water, I would probably not eat in that restaurant," he said.

Another danger sign is the health of restaurant employees. "Most of us have seen food workers who are visibly sick and who are handling food in restaurants," Goldberg said. Many food workers, Schwab said, are not paid for sick days, which may encourage them to come to work when they shouldn't.

"I personally try to avoid open salads," he said. "Usually there is no sneeze guard shielding food. Unwashed hands likely have held the serving spoons. When a lot of food is cut and handled, food workers with poor personal hygiene may transfer microbes to the food."

Salad bars can be tricky, Robien said, but she doesn't see them as a concern for most healthy people as long as there is a clean and well-kept sneeze guard in place.

Know yourself and know the patterns of what keeps you well and what makes you sick. Some people exhibit particular sensitivities. "The few times I have had food-borne illness has always been around mussels and clams," Robien said. "But, certainly, I have many friends who eat them regularly, without problems."

The threat posed by antibiotic-resistant microorganisms concerns Schwab greatly. It is important that all leafy greens in restaurant salads and salad bars be washed thoroughly. According to the CDC, produce, meat and poultry account for two-thirds of food-borne illnesses and more than half of the associated deaths.

"If we don't have good cleaning, separation, chilling and proper cooking of food, there is a heightened chance of infection, which could be due to antibiotic-resistant microorganisms - which can be very challenging to get rid of," Schwab said emphatically. "This is a greater threat now due to the vast amounts of subtherapeutic antibiotics that are used in concentrated animal-feeding operations."

Schwab advocates for policies that would better protect the food supply, such as a single federal agency responsible for food safety. "Currently there are well over a dozen agencies involved," he said. In addition, "all current food regulatory agencies should have the power to enforce mandatory food recalls, while currently many food recalls are voluntary."

The nation, he said, should have a comprehensive, integrated management system in which food safety is addressed from farm to fork.

At least 23,000 Americans die each year as a direct result of antibiotic-resistant infections, according to the CDC.

These illnesses may, of course, emerge from sources other than food, but the numbers could be reduced with better management of the food supply, Schwab says.

The experts interviewed recommend extra caution with young children, pregnant women and immunocompromised persons (including those on certain cancer therapies or with HIV), among others.

Hand sanitizers, useful in some settings - for example, at the beach - are "not the perfect choice," Schwab said. "Alcohol-based sanitizers can be effective on bacteria and do begin to remove the debris from your hands. They have minimal effectiveness on viruses and protozoa."

"Regular soap and water is a great public health preventative," he said.

Although most tap water in the United States is high-quality, it may travel through aging systems. "There may be ruptures or leaks in those pipes," affecting what comes through in tap water, Schwab said, problems that are impossible for the average person to discern.

"We should be placing a higher value on our potable water and indoor sanitation," which may mean more investment in infrastructure, he said in an e-mail. "We should all be willing to pay as much for our water and sewer as we do for our monthly cable and cellphone charges."

Schwab makes a point of shopping at farmers markets. "Compared with industrially produced food, locally produced, organic food sometimes has less probability of having levels of antibiotic-resistant bacteria," he says.

Promoted
Listen to the latest songs, only on JioSaavn.com
He advocates prudence, not paranoia. "This is risk reduction - everything has levels of risk," Schwab said. "If I can do simple things to reduce the risk for me and my family, I will do those things. But I will also enjoy life."

Kirsch is a freelance medical and health writer.