Have a light lunch to avoid afternoon laziness, says dietician 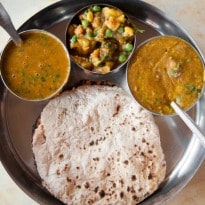 Frequent tea breaks is not the healthy answer to avoid afternoon slump. Have a light lunch to stay active and fit, says an expert.

Honey Tandon, chief executive dietician, Columbia Asia Hospital, Gurgaon, emphasises that a lot depends on what goes into the preparation of dishes.

"Rajma and dal makhni are generally considered to be heavy dishes, and any dish with high calories leads to lethargy. But the way to prepare makes a lot of difference. Replace butter and ghee with low fat milk. Add curd too. This way you'll get a low fat dish, which is also tasty," Tandon told IANS.

If not curries, she suggests kidney beans and pulses in the form of sprouts.

Kadhi is another favourite amongst Indians. But while there's nothing wrong with the curry which is made of curd and gram flour, Tandon advises preparing it without fried pakodas.

To prevent lethargy, she advises choosing Indian bread over rice. But if rice is your staple diet, concentrate on portions.

"When people eat rice they tend to eat double the amount compared to rotis (Indian bread) and this causes sleepiness. In lieu of two chapatis, eat one and a half bowl of rice, preferably brown," said Tandon.

"Eat it with salad for fibre-rich meal," she added.

Promoted
Listen to the latest songs, only on JioSaavn.com
Gajar ka halwa (carrot-based Indian dessert) is fondly consumed by foodies, especially during winter. Tandon warns against fattening ingredients while preparing it.

"Make it with lots of carrots, low fat milk and no sugar. You can add small amount of sugar free tablets," said Tandon.