Insects Could be the Planet's Next Food Source... Even if That Gives you the Creeps 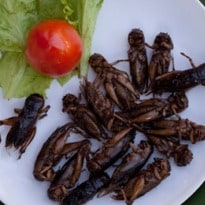 A festival next month in London aims to take the yuck factor out of eating bugs and promote the environmental benefits.

Crunchy, full of protein and to be found under a rock near you. Insects have long been overlooked as food in all but a handful of places around the world - but now they are crawling closer and closer to our plates.

This spring will see a drive towards removing the yuck factor and putting insects not just on experimental gastronomic menus but also on supermarket shelves.

In April there will be a festival in London, Pestival 2013 - a Wellcome Trust-backed insect appreciation event where the consumption of creepy-crawlies comes high on the agenda. It will feature a two-day "pop-up" restaurant by the Nordic Food Lab, the Scandinavian team behind the Danish restaurant Noma, which brought ants to the table for a sellout 10-day run at Claridge's hotel in Mayfair last year.

Noma has been named the world's best restaurant by Restaurant magazine for three years running. Its chef, René Redzepi, says that ants taste like "seared lemon rind" and a purée of fermented grasshoppers and moth larvae tastes like a strong fish sauce. Bee larvae make a sweet mayonnaise used in place of eggs and scientists are constantly coming up with new ways to use little creatures.

In March a BBC documentary will feature food writer Stefan Gates searching out and eating deep-fried locusts and barbecued tarantulas, but behind all the gimmicks and jokes about flies in the soup there is a deeply serious message. Many experts believe there is a clear environmental benefit to humans eating creepy-crawlies.

The UN's Food and Agriculture Organisation (FAO) has been funding projects since 2011 aimed at promoting the eating and farming of insects in south-east Asia and Africa, where an estimated two billion people already eat insects and caterpillar larvae as a regular part of their diet. Last year the FAO published a list of 1,909 edible species of insect and, with sponsorship from the Dutch government, plans a major international conference on "this valuable food source" this year.

Insects are plentiful - globally, for every human there are 40 tonnes of insects - so there is not too much chance of them being endangered, and they are unlikely to have been dosed with chemicals.

"I know it's taboo to eat bugs in the western world, but why not?", Redzepi has said. "You go to south-east Asia and this is a common thing. You read about it from all over the world, that people are eating bugs. If you like mushrooms, you've eaten so many worms you cannot imagine. But also we eat honey, and honey is the vomit of a bee. Think of that next time you pour it into your tea."

He said that the basic premise behind Nordic Food Lab was: "Nothing is not edible."

Insects are critical to life on Earth and, with more than a million species, are the most diverse group of creatures on the planet, yet they are misunderstood, reviled and often put to death with one squish by humans just because they are there.

Over the next 30 years the planet's human population will increase to nine billion. Already one billion people do not get enough food. The increase will mean more pressure on agricultural land, water, forests, fisheries and biodiversity resources, as well as nutrients and energy supplies.

The cost of meat is rising, not just in terms of hard cash but also in terms of the amount of rainforest that is destroyed for grazing or to grow feedstuff for cattle. There is also the issue of methane excreted by cows. The livestock farming contribution in terms of greenhouse gas emissions is enormous - 35% of the planet's methane, 65% of its nitrous oxide and 9% of the carbon dioxide.

Edible insects emit fewer gases, contain high-quality protein, vitamins and amino acids, and have a high food conversion rate, needing a quarter of the food intake of sheep, and half of pigs and chickens, to produce the same amount of protein. They emit less greenhouse gases and ammonia than cows and can be grown on organic waste. China is already successfully setting up huge maggot farms. Zimbabwe has a thriving mapone caterpillar industry and Laos was given nearly $500,000 (£330,000) by the FAO to develop an insect-harvesting project. It's already big business in the UK, though not always official: last week a man was detained by Gatwick customs as he stepped off a flight from Burkina Faso with 94 kilos of mapone, worth nearly £40,000, in his luggage.

A study by FoodServiceWarehouse.com suggested that swapping pork and beef for crickets and locusts could help to reduce greenhouse gas emissions by as much as 95%. But perhaps the fairest thing about eating worms and insects comes when we are dead - then they get a chance to nibble their own back.