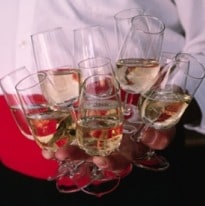 Dessert wines are gorgeous creatures often lost somewhere between Calvados and Drambuie on a restaurant's wine list, or at the back shelves of your local wine merchant. Some of them occasionally get trotted out for Christmas but generally speaking, dessert wines rarely see the light of day. This is a crying shame.

The infamous "bin-cident" that forced Iain Watters to walk away from The Great British Bake Off earlier this season might not have happened had the handsome baker from Belfast been allowed to indulge in some dessert wine while preparing his baked alaska.There are two reasons why dessert wines aren't embraced by more of us. Firstly, "dessert wine" is a misleadingly generic term that shoves a very diverse group of wines made all over the worldinto one little box. For example, although sauternes is probably the most famous dessert wine on these shores, there are many other fantastic producers of dessert wines from other parts of France, Sauternes is not the only noteworthy French dessert wine, for example, to say nothing of joyous nectars from Spain, Italy, Germany, Hungary and South Africa. One of the world's most famous dessert wines is made in Canada!

The second reason is that we have a complicated relationship with sugar. Sometimes, the perception of increased calories means we avoid desserts and dessert wines. (Reader, all wines contain sugar, so if you're trying to lose pounds before your school reunion, best to avoid alcohol altogether). Others think "sweet" somehow means "low quality". Yes, sugar is added to certain wines to address various problems but, in most cases, dessert wines are actually more difficult to produce than less sweet wines. They are the result of late harvesting, a process that gives the grapes more concentrated flavours. One taste and you'll see that sweetness becomes merely a point of departure for more complex notes.

Sometimes sweeter is better. I've never understood why brut champagne is served with wedding cake after hours of gin and dancing. Everyone's usually too blotto to notice, but it's almost always a disastrous pairing. A sweeter style of champagne, such as a demi-sec Pol Roger Rich Demi-Sec NV (£39.95 at bbr.com), would be absolute perfection. Don't you want to start your marriage off on the best possible note?

If you care about your dessert, treat it to a wine of its own, not just the rest of that cabernet sauvignon, which might have been great with the venison but just isn't going to evoke that same magic sitting next to creme brulee or apple crumble. Those below are so good you could have them instead of dessert.