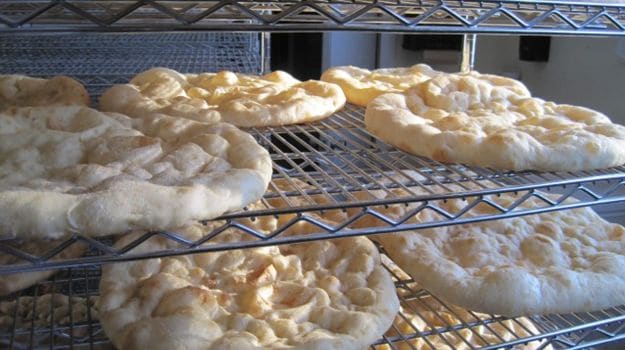 Regionally sourcing flour for 15,000 pounds of bread a week is the equivalent of a lunar landing, but in Vermont one bakery has found the way to do so. Red Hen Baking Co. has been baking organic bread in central Vermont for 16 years, and all of the flour that the bakery uses comes from within a 150-mile radius.

"As a baker, it's a real luxury to have the same wheat all the time," said Randy George, of Red Hen Baking Co. The Vermont baker spoke about local flour with Quebec farmer Loic Dewavrin at the Northern Grain Growers Association conference in March, in Essex, Vermont. The two have an uncommon partnership.

Such leaps forward don't register as significant to consumers because growing grains and making flour are almost invisible processes. However, the farmers, bakers and food advocates at the conference appreciated this achievement, and listened hard for details of the challenges en route to this success story.

The Importance of Local Flour

"Normally, you will see some variation from flour lot to flour lot. You can never count on complete consistency," George said. The typical roller mill draws wheat from a variety of sources, but the flour from Le Moulin des Cedres all comes from wheat grown by Dewavrin and his family at their organic farm, Les Fermes Longpres.

"Roller mills are incredibly expensive infrastructure. I never heard of one that was on a farm," he said.Stone mills located on farms are not uncommon. This type of mill is relatively simple to run and inexpensive to purchase. Roller mills, however, are industrial-scale equipment. Les Fermes Longpres, located just west of Montreal, recently finished assembling a small roller mill. The family took four years to complete the project, using parts from a defunct French roller mill and doing much of the work themselves to minimize the investment.

At Le Moulin des Cedres, the Dewavrin family mills wheat grown on the farm. With an eye toward evening out seasonal irregularities, the flour is made from a combination of two years' crops. This is why baker George was marveling at having access to uniform flour.

All mills use raw materials that are products of nature and have a wide range of potential expression. Since roller mills pool wheat from multiple sources, the result can vary. Even with careful testing of grains to try to keep the range within limited parameters, mills are blending wheat from many different climates and micro climates, from many different farms with various cultivation, harvest and storage habits, and the flour and its performance changes accordingly.

Le Moulin des Cedres is unique, but exemplary of the farm's approach. When Dewavrin returned to the family farm after a career as an industrial engineer, he and his brothers began to convert a conventional corn-soy crop farm into a more diversified organic operation. This was in pursuit of a system that could support the brothers financially, and support the farm's health and long-term viability.

To make the most of what they grew, the brothers sought methods to capture crop value on the farm and avoid selling crops into the commodity market as much as possible. Making sunflower oil was the first value-added process they tackled. Next, they considered whether to do something with the soy they grew, or the wheat. After investigating the markets, they saw that what they could do with soy didn't hold as much promise. Flour seemed the best route. There was enough whole-grain, stone-milled flour, however, and bakers had expressed interest in locally grown and produced white flour.

Keeping the Integrity of the Crop

The idea of having full command of the crop from seed to selling had great appeal to the Dewavrin family. Without running a mill themselves, their production was mixed with grains from other farms.

"Our goal was to keep the integrity of the crop," Dewavrin explained. Selling wheat to a mill meant their crops were mixed with many others. "We lost the purity of the product and the controlled efforts we put into it."

Les Fermes Longpres is a very careful farm. The family puts a lot of thought into crop rotations, tillage, and other ways of building good soil, the basic tenet of organic farming.

For the mill, they also worked hard on wheat quality issues, from selecting plant varieties to combating diseases and pests that challenge wheat in the field, and in storage. They began milling slowly last year, determined to understand the process and create a good flour for bakers.

Feedback from bakeries like Red Hen, one of the few bakeries using the mill's limited supply, helped in this area. In response to what George observed when baking with Les Cedres' early mill runs, Dewavrin increased the level of starch damage slightly to improve the baking quality of the flour.

"Damaged starch" is an odd term. While it sounds like a bad thing, it's just milling terminology for opening up the starch granules.

"Getting just the right amount of 'damage' is critical so that the flour is in the right state for the baker to continue the 'damage' in the baking process," George said. All mills have to get this right, so the adjustment made is not unique. But the way that the correction came about, through the baker communicating with the farmer/miller was entirely different than the norm.

Listen to the latest songs, only on JioSaavn.com
Leaps forward in decentralizing the production of staple crops don't register as significant, not yet. But the more that bakers seek local flour, and the more that farmers seek noncommodity marketing options, the more consumers will learn to understand and appreciate the small food mountains people are moving.