Mayonnaise Gets a Chance in the Spotlight 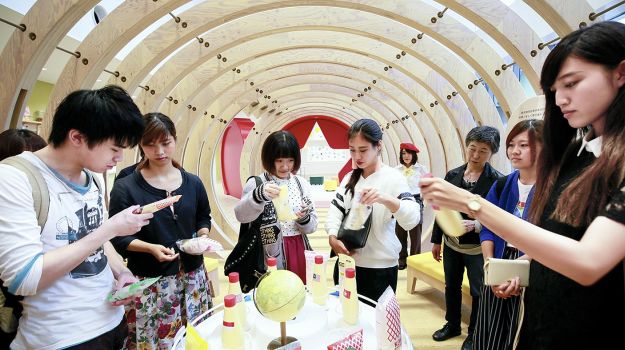 A huge "mayonnaise dome" with a wooden frame surprises visitors to Mayoterrace, Kewpie Corp.'s facility in Chofu, Tokyo, which is aiming to help the public gain deeper knowledge about mayonnaise. The entrance of the dome resembles the top on the company's signature mayonnaise bottle: red, with a star-shaped opening.

Because the dome is 500,000 times bigger than the regular 450-gram bottle of mayonnaise that is usually kept in my refrigerator, I felt as if I had become much smaller when I entered.

Shiori Tanaka, 25, is one of the "communicator" guides at Mayoterrace. She told a story that visitors found hard to believe. "When mayonnaise was first introduced [in Japan], some people put it in their hair because they mistakenly thought it was for hairdressing."

That episode indicates how little was known about mayonnaise among the public when Kewpie put it on the market for the first time in Japan in 1925.

In the 90 years that have passed, mayonnaise has established itself as an indispensable seasoning in the Japanese diet, commonly used for salads and sandwiches. Mayonnaise has spread globally, and a variety of Kewpie products that are sold overseas are on display in the dome.

Mayonnaise for Thailand has a green color, which is the result of wasabi being used as an ingredient because Thai people prefer a hot flavor, while mayonnaise for Chinese people contains sugar, because they eat it with strawberries, melons and grapes.Exiting the dome, visitors are led to a room called the "factory walk" where they can watch a video about how mayonnaise is produced. The images, including a machine that can work at a dizzying pace as it breaks 600 eggs per minute, give the impression you are taking a factory tour.

In the facility's kitchen, visitors were making their own original mayonnaise by adding various spices such as curry powder, hot pepper, shiso and black pepper. They tasted their creations with lettuce and bell peppers.

Listen to the latest songs, only on JioSaavn.com
"[My choice of spice] goes better than I thought," one visitor said. "This might be good with nibbles when drinking," said another. Moe Isemura, one of the visitors, described mayonnaise as a familiar item. "However, I didn't know much about its ingredients," said the first-year Bunka Gakuen University student. "I can get a lot of information while visiting here."

Tanaka also offered some tips for using mayonnaise as a way of improving your cooking skills. If used as a substitute for oil when making fried rice, it can prevent the rice from becoming sticky, she said.