Of Brews and Bites: When Beer Meets its Match 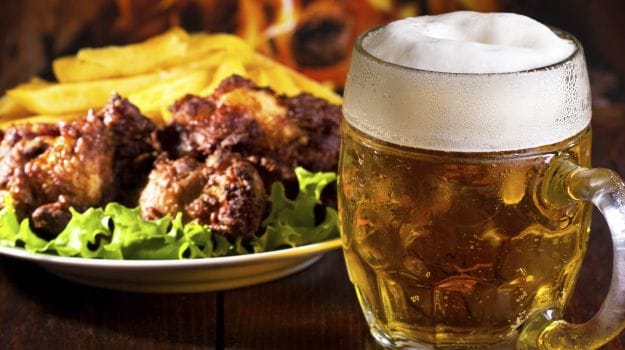 Attention all booze geeks. You may have gargled, swished and swallowed the best brew but what about matching your meals? If you’ve reserved that for wine, back of the class. You better take that beer, seriously.

Food makes me happy, and beer makes me happier. I am probably going to catch some heat for saying this, but it’s definitely easier to pair food with beer than wine. I say this not because I know less, but because beer is more versatile. It can easily lend itself to a wide variety of dishes.

With renewed curiosity in beer, a new generation of microbreweries has descended upon us. These small-scale breweries, mostly independent, serve freshly brewed and non-pasteurized beer which makes them better than their bottled companions. Craft beer is one that is produced in small batches using the traditional brewing technique without any added preservatives.

Amidst this new wave are a growing number of chefs who are creating menus with beer in a supporting role. Take the White Owl Brewery& Bistro in Mumbai. Executive Chef Dinesh Bherwani offers small plates with recommended beer pairings. You have spicy peanut chicken wings married to Diablo, Irish red ale with a mild aroma and a light caramel flavour. Then there are mini falafel crisps that stand up to Halcyon with influences of the German Hefeweizen and a fruity whiff.

The idea of pint pairing is hardly new territory. Bangalore’s first craft brewery, The Biere Club, is entering the fifth year of operation.They've held several beer dinners where meals are matched with different brews. “Beer offers an enormous variety of flavours that complements almost all foods unlike wine which you may not be able to pair with Indian food. Since spicy food matches well with beer, we have a lot Mediterranean bar snacks and platters on the menu,” says Vishal Nagpal, Director Operations.

He adds, “Before craft breweries made an entry, people were mostly drinking bottled lagers. But they were also looking for new experiences. This gave birth to brew pubs where one can experiment with different types and flavours of beer. Now, you get to choose between Belgian wheat beer with a dash of orange and coriander and a stout with hints of coffee.”

Would sir and madam prefer an English porter with the steak or an American pale ale with the burger? As long as I can remember, beer was the simplest thing to order. Not anymore.  Start with any food or beer and find a suitable partner keeping in mind the following tips.

1. Match strength with strength – We can borrow this well-established term of wine pairing and apply it to beers. Delicate flavours work well with light beers like pale ale and pilseners while heavy dishes demand a strong flavoured beer like stout. The intensity of beer depends on various factors like alcohol strength, bitterness, maltiness and roastiness. Similarly, the flavour of food is sum of cooking method, spiciness and texture.

“It depends on your palate and what you want to eat. In general, a lighter beer would be great if paired with lighter food and heavier beer is best paired with hearty & meaty food. Think about main flavours of the beer (malty, hoppy, citrus or fruity) and pair them with the main flavors in your meal (roasted, spicy, savory, buttery or sweet),” says Chef Dinesh Bherwani, Executive Chef, The White Owl Brewery& Bistro.

2. Creating harmony – Great pairings are often a result of similar flavours or aromas. “Look for flavor bridges, where the flavors of craft beer can bridge to the flavors in a food dish,” says Chef Dinesh from The White Owl. On their menu, they’ve mated a tropical American pale ale that has floral notes with a refreshing tomato eggplant stew and chive polenta. The citrusy undertone that both share definitely hits the spot.

3. Identifying characteristics – “It is important to identify the characteristics like taste elements, flavors, intensity and sensation of the craft beer you plan to pair with,” suggest Chef Akash Arora and Assistant Brew Master Praveen Rai at 7 Degrees Brauhaus, Gurgaon. Certain qualities of food and beer when interact with each other enhance the taste experience.

Beer pairings thrive on both complimenting and contrasting relationships. For instance, the sweetness of roasted malt creates magic with the richness of meat fat or spicy foods. Carbonated beers work well with meaty dishes as the fizzy texture cuts down the richness. Similarly, a hoppy beer is a total winner with sweet dishes or desserts.

There will always be a place for a frosted mug besides a slice of pizza, but pairing your food with the right brew can actually lift a dish.

Lager – Lagers are brewed and fermented at low temperatures. They are carbonated with floral notes and caramel-like sweetness. Goes best with: Herbed Chicken, Salmon, Hot Dogs, Grilled Cheese, Burgers, and Roast Chicken. Also, pairs well with the saltiness of Parmesan or the potent flavor of Stilton cheese.

Wheat Beer – These are less bitter and the flavor mostly comes from aromatics.  They are cloudy and creamy with a sharp taste of wheat in some that creates a silky mouth feel. Goes best with: Fruity Dishes, German Sausages, Pork Schnitzel, Desserts with warm spices like cloves, nutmeg or cinnamon, Mexican Food and Pan-Seared Rawas.

Stout – A dark beer, the word stout was used to refer to strong brews. It stands out due to the smokey, roasted flavor. Goes best with: Barbecue, Stews, Braised Dishes, Smoked Brisket, Charcoal-Grilled Meats

Ale – Ales are more robust than lagers. They may have a fruity or spicy undertone. They are brewed using warm fermentation. The yeast ferments faster which produces a more full-bodied flavor. Goes best with: Salads, Light Appetizers, Goat Cheese, Pizza, Pasta and Seafood.

Not many of us take food and drink pairings seriously, especially when it comes to beer with its casual appeal. But it’s all about creating experiences that people may enjoy. Between the age of gastro pubs and the culture of craft breweries, I’d like to see beer climb up the fine dining ladder and become mainstream.