Sating an Unseasonable Appetite for a Hint of Mint 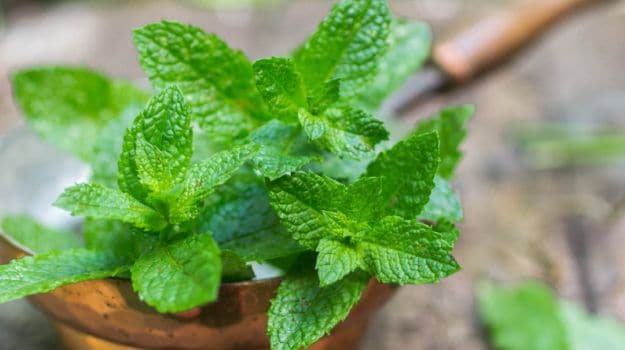 I had a craving for fresh mint. I wanted to toss it with sliced oranges, knead it into meatballs and steep it for tea, even though January is not mint's time. The supermarket had it in little plastic packages, skimpy and half-dead. So I set out in search of a local nursery with mint plants. All I found were spindly stems, almost bare of leaves.

Finally I found a woman, potting up houseplants in a large greenhouse, who offered to rent me one of her mother plants for a few days. I would not have been more surprised if she'd rented me her mother. A mother plant, less cozily called a stock plant, is one used in the trade for propagation. Large, robust and cosseted, it exists to have parts of it removed and rooted in a potting medium so that they will form lots of new plants. Sometimes these parts are offsets, like the arachnoid clusters at the tips of a spider plant's long stems. More often they are cuttings, either whole leaves, parts of leaves or, as in the case of this mint plant, sprigs. In all cases they are clones that will be exactly like their parent.

"It's okay to keep it till Monday," my new friend assured me. "We won't be propagating mint until mid-March." So I took my rent-a-Mom home, played with it in the kitchen and decided to do a little propagation of my own, just to keep fresh mint in my life.

If you have a craving for fresh mint in winter but no stock plant to borrow, you can buy stems in the herb section of the supermarket and use them as cuttings.

Indeed, if you've ever brought some mint stems indoors to make mojitos and stuck the extras in a glass of water on the windowsill, you've noticed that they start to make roots in the glass before a week has passed. Before long those roots are a white tangle in need of nourishment and it's time to pot them up in soil if you want to keep them going. I could do that, I figured, and even if the new plant didn't like my slightly overheated home, I could keep taking cuttings from it and run a propagation relay, with several pots going at once, until spring.

There's something supercharged about mint roots. Outdoors, that trait can make them a pest, as underground runners quickly colonize a garden. We grow mint in a moist ditch that drains one of our fields, but it can also be grown in a pot submerged in the soil, to restrain it. For my indoor mint, I'll find a cool window where it won't be baked by winter's low-angle sun.

But now's the time when the stretch between sunrise and sunset exceeds 10 hours and light-filled days start to return - even if the temperature is at its low point. The houseplants will take the cue and perk up. Up in the northern forest, sap will start to flow in the maple trees as cold nights alternate with sun-warmed days.

Let's celebrate that by mixing up a mojito - my secret recipe. Instead of muddling the mint with simple syrup, let's use a complex one, boiled down from maple sap, rich in minerals like manganese and zinc. Add rum, club soda and fresh-squeezed lime, and lift a glass to Mother Nature, of whom we are all just one tiny piece.