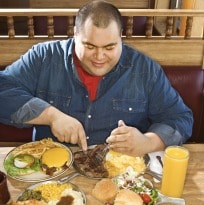 The concept of 'stress eating' is an old one. Researchers have time and again linked stress with untimely food cravings that may lead to obesity. Various scientific studies have shown that stress can induce the need to eat, sabotage all weight loss efforts and trigger many health problems.

According to experts, if you cannot resist the sweet stuff in your refrigerator and crave for food even after a sumptuous meal, you could be a victim of overeating. Going long hours without eating and choosing from the wide variety of food options available in the market are few of the many factors that contribute to overeating.

While listing the various reasons that lead to overeating, dietitian Akshita Aggarwal says, "Usually, when people feel emotional, stressed, are under any kind of trauma or have any discomfort, they tend to eat a lot."

She adds, "Sometimes people tend to overeat when they leave long gaps between two meals. Another reason could be that they eat to make themselves feel better and are trying to overcome a trauma." (More: How stress can make you consume more sugar)

Divya Choudhary, Chief Dietitian at Max Hospital agrees and adds, "Apart from overeating, stress can also cause under-eating. Under eating leads to hair fall, calcium deficiency, less immunity, lack of glow on the face and anemia."

However, Pawan Sethi, nutritionist at Dr. Rachna's Diet Clinic said that the percentage of people who eat when stressed is lower. "Rather, people these days earn well and have more affordable food options to select from. Also, the number of outings have increased where they end up eating more junk which makes them overweight."

Experts suggest that skipping or having a late breakfast is also a reason for being overweight.

"These days, people leave for work early and by the time they eat it gets late. Since they don't eat a proper meal, they are extremely hungry and end up eating anything they get. The main effect of overeating is overweight, which can further lead to various medical complications" concurred DivyaChoudhary.

Polycystic Ovary Syndrome (PCOS) is a hormonal disorder which affects women of reproductive age. Those affected suffer from numerous cysts located along the outer edge of each ovary. "It is very important for women with PCOS to keep a tab on their weight as the condition leads to further medical complications. There is no particular age for a woman to catch this condition, it can start from an early age as well." added Choudhary.

"The condition is usually seen in youngsters as they eat more junk food, but even elders suffer from the same problem." said Sethi.

A latest study conducted at The Ohio State University in United States proves that stressful events can negatively affect the body's metabolism and potentially contribute to weight gain, almost five kilograms a year in women.

Promoted
Listen to the latest songs, only on JioSaavn.com
The study was conducted on 58 women with an average age 53. It was found that the stressed women also had higher levels of insulin, which contributes to the storage of fat, and less fat oxidation - the conversion of large fat molecules into smaller molecules that can be used as fuel. Fat that is not burned is stored.

Akshita Aggarwal concluded by saying that if compulsive overeating, characterized by excessive food consumption, is not treated it can lead to diseases like obesity, diabetics, heart disease, hypertension, depression, kidney disease and high cholesterol.