The £250,000 Kitchen? Blame the Molecular Gastronomists 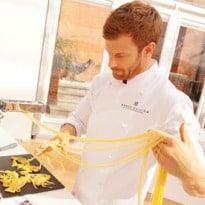 It is the kind of kitchen where rustling up a plate of beans on toast would be like playing Chopsticks on a Steinway. Electrolux has launched what must be the world's most expensive domestic kitchen and there's not a toaster or microwave in sight.

Instead, an arsenal of blast-chillers, sous-vide vacuum packers and ovens powered by computer hard drives, all apparently designed for super-rich MasterChef obsessives, has gone on sale with a lettuce-wilting price tag of £76,000, rising to more than £200,000 if you want the very best ovens. Cupboards, drawers and work surfaces are your own business, adding upwards of £100,000 for the best finishes, say designers. Welcome to the quarter of a million pound kitchen.

In lean economic times, it is a phenomenon that might seem absurd if not obscene, but it is, says the Swedish company, a logical consequence of the aspirational classes' growing obsession with food and the impact of high technology on cooking culture.

The market is those who marvel at the tricks of molecular gastronomy pioneered by science-obsessed chefs like Heston Blumenthal and Ferran Adrià, and for whom it is simply no longer good enough to bang a roast in the oven for a couple of hours and hope for the best.

"We do a short rib of beef cooked at 68 degrees centigrade for 72 hours," explains Tom Aikens, the Michelin-starred chef who has been enlisted to promote the Electrolux kitchen at the kind of extravagant launch event more normally laid on by fashion labels or sports car companies. "Once cooked you pop it in the blast chiller so it sets, slice it into neat pieces, warm it in the sous-vide, then flash it in a hot oven. You could do that in this kitchen."

Perhaps Aikens could, but would anyone who can afford to buy it have the skill or the time? This week Gwyneth Paltrow, the Hollywood actor, popped into see the demonstration model set up in London, as did James Duigan, a personal trainer whose clients have included Hugh Grant and Elle Macpherson.

"I am sure some people will buy it only because they believe it's the pinnacle of what is on the market," said Henrik Otto, the designer. "But on the other hand they probably have a private chef who will use it for them. [The market] is people who holiday in the Caribbean, fly there on their private jet and own their own island."

When Electrolux divulges that the vacuum packer which looks like a laptop costs £6,200, and the blast chiller with an iPod-style control panel is £11,750, you can see why.

The company is not alone in seeking to capitalise on the rage for cheffy cooking. Lancashire firm Sous-vide Tools has reported a quadrupling of sales in the last 18 months of vacuum sealers and water baths, which have been made fashionable by TV cooking programmes, and now sells more than 100 kits a month. John Lewis, which started stocking sous-vide machines in 2010, said sales were up 22% on the same time last year.

Electrolux has calculated its Grand Cuisine brand has a potential market of 50,000 people around the world, many with multiple properties and for whom money is no object.

"Some people have bought two of everything," Otto says. "We have some clients who couldn't choose between the induction hob and the gas hob so bought both." Each for the price of a small car.

Some of the equipment is so complicated - the combination oven apparently washes itself if you add soap and water - that installation comes with two training sessions with a professional chef. It is about as far from a traditional country kitchen as you could get.

A wok hob is known as the "surround induction zone" and frying pans are out. Instead there is an unnerving "sear hob" which heats to 275 degrees and is about as far from a greasy spoon's griddle as it is possible to be. Because of its chromium coating, it appears to emit almost no heat at all until Aikens drops a dollop of lemon-infused pancake batter on to it and it sizzles into life.

"You don't want children to play with this kind of kit," says a member of Electrolux's marketing team.

Aikens particularly likes the £2,000 food mixer, saying with the admiration of a chef who knows about the rough and tumble of kitchen life: "You could chuck it against the wall and it wouldn't break. It's like Terminator."

It is clear this equipment could quickly become a coveted boy's toy, attractive to premiership footballers for whom it would be no more than a week's wages. Otto compares owning the kitchen to owning a Ferrari, and the controls are equally sensitive.

The oven is equipped with a touch screen panel that allows the temperature and humidity to be controlled to the nearest degree and percentage point. You can even plug in a computer memory stick loaded with programmes for specific recipes, all of which leads Electrolux's vice-president, Mike Hutchinson, to make a claim that has surely never before been made on behalf of an oven: "It gives you a link into the future."

"Cooking is no longer just domestic home cooking," says Aikens as he delicately turns his pancakes. "It's now a bit edgy. I see men cooking now and its not seen as a sissy's job. It is very much a man's job as much as a woman's."

The result, the launch of the Grand Cuisine range seems to suggest, is the peculiar rise and rise of the kitchen as 21st century status symbol. But there is a downside, says Otto, especially if your souffles flop or your chicken comes out pink: "If you own this, you would never be able to blame your equipment again."

Picture: The Electrolux professional kitchen for the home is being launched by the chef Tom Aikens. Bring on the blast-chillers, sous-vide vacuum packers and ovens powered by computer hard drives. Photograph: Linda Nylind for the Guardian