The Miraculous Power of Papaya Flower 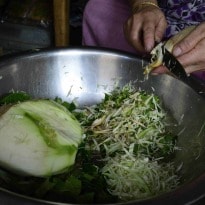 Every morning, she hovered around her garden and stretched out to reach for the flowers of papaya. Thankfully, the trees that grew in her garden were only a little taller than her petite self. She would deliberately choose flowers over the ripe fruits. One by one, she would pluck the delicate, small off-white flowers and gather the fresh produce in a little cane basket. She could easily distinguish the flowers by their shapes: the pear shaped ones were the female flowers and the cylindrical ones were the male flowers.

This vivid memory of my late maternal grandmother comes to mind each time I think of papaya flower. What prompted her to pluck those flowers was a belief that consuming them in the form of a vegetable would help bring down her insulin level. A diabetic patient who religiously tried to find a cure in nature, my grandmother left behind many antidotes that come handy even to this day. They may lack a strong scientific explanation, but have always worked. Something as simple as making me and my siblings eat the tender and bitter leaves of guava when we had an upset or running stomach, worked instantly!

I have seen my own mother resorting to these odd but effective tricks and cure herself of diabetes. Nutritionists like Dr. Shikha Sharma, Managing Director, Nutri Health agree with this belief. She said, "I am aware of the benefits of papaya flower and that it is good for liver problems and lung infections." It's not just the flowers, the leaves and fruit be it raw or ripe, are packed with multiple vitamins and healing properties. It is considered a revered fruit by the Mayans, the indigenous people of south eastern Mexico and parts of Central America. They worship the tree as the 'Tree of Life' and believe it to be the gift of God because of its many medicinal properties. It is rumoured that it was also Christopher Columbus' favourite fruit.

The papaya flower is rich in vitamins A, C and E which make it a good source of dietary fibre. It's also rich in folate and has antioxidant properties which is how it prevents cholesterol oxidation. It can be used in many preventative treatments for ailments like atherosclerosis, strokes, heart attacks and diabetes related heart disease.

The good thing about papaya is that they grow effortlessly and in abundance in Manipur. Of course, they're found in other parts of the country too but one finds them in almost every backyard in Manipur. Untended and left to nature, they thrive and bear fruit and flower without fail through the year.

During the outbreak of dengue in the capital, the leaves of papaya become sought-after commodities. They're made into a pulp and given to dengue patients as they help regenerate white blood cells and platelets. I remember having been a victim of dengue and literally gulping down the pulp every second day. Doctors are now vouching for the healing properties of the flowers and such kind of strong evidence is now backed by many scientific studies conducted at various institutes. The juice from the leaves has cancer fighting properties and also works as a real immunity booster.

Cooking with Papaya Flower
The common usage of the fruit and flower is what makes it so unique. My grandmother would carefully wash the leaves in water and let them dry. The she would heat oil in a pan and fry them lightly till they were wilted, and then add salt to the dish. This would be eaten as a side dish or paired with rice. Its slightly peculiar and bitter taste, like that of bitter gourd, isn't everyone's cup of tea but is still very enjoyable.

Photo Credits: SIddharth Haobijam
But then, with papaya, it's not just the flower that is considered medicinal and healing. The fruit, whether it is ripe or raw is equally valued. Quite like the Thai who share many common ingredients with people in the Northeast, Manipuri's have their own version of raw papaya salad which is called Singzu. This is made with raw papaya which is first peeled and thinly sliced with the same precision as the Thai would slice their raw papaya for som tam. The thinly-sliced pieces are mixed with mashed green chillis (first roasted), fermented fry fish and roasted black sesame seeds or gram flour. Then it's garnished with coriander leaves and eaten either during meal time, in the afternoon or in between meals when one feels like having something spicy. It's not just prepared at home, but even sold at local shacks. What sets it apart from som tam is the garnish. The Thai version is peppered with fish sauce, a hint of honey, soya sauce and garnished with roasted peanut.

In upper Assam, raw papaya is an important ingredient used when cooking duck. A chunk of papaya in the dish, softens the meat. It is also used as a softening agent when cooking mutton and also gives it a distinct flavour.

Method
1. Peel the papaya and wash under a running tap
2. Carefully, shred in small pieces. Keep aside
3. Roast the chillis and fermented fish and mash them together to make a paste
4. Add salt. Road sesame seeds and make a paste when its done
5. Mix all the ingredients in a plate, garnish with chopped coriander leaves and serve

Comments
Disclaimer: The opinions expressed within this article are the personal opinions of the author. NDTV is not responsible for the accuracy, completeness, suitability, or validity of any information on this article. All information is provided on an as-is basis. The information, facts or opinions appearing in the article do not reflect the views of NDTV and NDTV does not assume any responsibility or liability for the same.